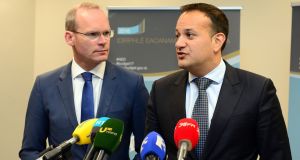 Minister for Housing Simon Coveney has warned that political relationships can become “fractious” during party leadership contests but urged colleagues to avoid this in so far as was possible.

His comments came as sources in the camp of his main rival for the Fine Gael leadership Minister for Social Welfare Leo Varadkar claimed their candidate now had the “momentum” .

With Taoiseach Enda Kenny preparing to inform Fine Gael colleagues of his intentions, Mr Coveney suggested a formal succession contest would be under way “before the summer break”.

Speaking in Kinsale, Co Cork on Sunday, Mr Coveney rejected reports he would launch his leadership campaign on Monday, saying it would be inappropriate to do so.

“It would be untrue to say I haven’t been talking to colleagues obviously about preparing for that contest because we know that it is coming,” he said.

“We have a new system now of electing a leader and it has never been tried or tested before. It will last 19 or 20 days which is much longer than we have had before.

“So obviously there are dangers of divisions...politics is a competitive process. It often involves pretty fractious relationships during leadership changes. So we need to avoid that as best we can.”

Meanwhile, sources on Mr Varadkar’s side said he was in regular contact with committed supporters within the party. “We’re confident of the numbers. It’s looking very good at the moment. The momentum is with Leo,” one said.

“Leo’s asked anybody who has made up their mind to try holding off for as long as possible until there actually is a vacancy, out of respect to the Taoiseach.”

The electoral college that will decide the new Fine Gael leader comprises the parliamentary party, councillors and rank and file membership.

Minister for Justice Frances Fitzgerald is continuing to consider entering the upcoming contest but is expected to make no comment until Mr Kenny makes the situation clear.

Mr Kenny is widely expected to announce he will step down after a number of political events have taken place. These include the address of the EU’s chief Brexit negotiator Michel Barnier to a joint sitting of the Dáil and Seanad on Wednesday and an European People’s Party (EPP) meeting in Co Wicklow on Thursday and Friday.

Fine Gael is a founding member of the centre-right EPP, which is the largest grouping in the European Parliament.

Mr Varadkar refused to be drawn on whether he thought Mr Kenny should be offered an advisory role on Brexit when he stands down as Taoiseach.

Mr Varadkar said on Sunday he would not be so “presumptuous or arrogant’’ to offer anybody a job in the future, let alone the Taoiseach.

He said Mr Kenny was Taoiseach and Fine Gael leader and would remain in that role until he decided otherwise.

He told RTÉ’s The Week In Politics the timeline for the Taoiseach to stand down was entirely a matter for him.

“Whenever he will make the decision, he will make it, and that is up to him,’’ he added. He said there was no vacancy at the moment.

Mr Varadkar said he could not see how a change of Taoiseach would make a fundamental difference to the running of the minority Government.

“We have a confidence-and-supply agreement that was negotiated between Fianna Fáil and Fine Gael,’’ he added.

He said there was also an agreement with a number of Independents.

Meanwhile, Mr Coveney said he had “no problem” with taking part in the contenders’ television debate Mr Varadkar called for last week.

“I have always said I welcome debate. I am not exactly shy of the media. I am on fairly regularly debating everyone and anyone. So I have no problem with that if it happens,” Mr Coveney said.

However, he said this was primarily a role for the party and he was not going to tell the party how to run a leadership election.

“That is a matter for the National Executive in Fine Gael. When this process starts undoubtedly I will be a candidate but I don’t choose how the process works.

“I would like to have a debate. I think hopefully this will be a debate around ideas.”