‘Best of Britain’ leader targeted by worst of Brexit defenders 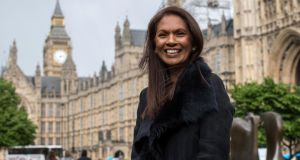 Gina Miller, who has raised more than £350,000 to fund Best for Britain, which hopes to persuade voters to back the most viable alternative to the Tories. Photograph: Chris J Ratcliffe/AFP/Getty Images

Theresa May’s claim that the European Union is attempting to influence Britain’s general election may be diplomatically reckless but it is unlikely to harm the Conservatives as polls point to a landslide victory next month. For most candidates in the other parties, the aim is no longer to win the election but to keep their own seats and limit the size of the prime minister’s majority.

Gina Miller, who took a successful legal action to force May into giving MPs a vote on triggering article 50, believes the only way to achieve this is through tactical voting. She has raised more than £350,000 (€413,000) to fund a new group called Best for Britain, which hopes to succeed where others have failed through the years in persuading voters to back the most viable alternative to the Tories.

“An hour after the election speech I thought, okay, this is literally the last-chance saloon because if it’s this huge landslide then basically we don’t really have any opposition for quite some time and we’ve endangered our democracy,” she says.

The 52-year-old businesswoman, who was born in British Guiana and is black, has been subject to relentless racist and sexist abuse since she took her legal action over Brexit. Rhodri Colwyn Philipps, the fourth Viscount St Davids, appeared in court this week over a Facebook post in which he allegedly promised “£5,000 for the first person to ‘accidentally’ run over this bloody troublesome first generation immigrant.”

Miller says she now receives death threats daily, and that an anti-terrorism squad has joined the police team which monitors the threats.

“They are aware of everything. They’re monitoring everything. Even last night there was one that went up in Swansea, a campaign to take me out,” she says. “They’ve united around a single message. Now it’s all that I should be killed.”

Miller’s campaign is based on Canada’s Strategic Vote Initiative in 2015 which helped Justin Trudeau to win an unexpected victory over Conservative Stephen Harper. Hisham Abdel-Rahman, who founded the Canadian initiative, is coming to London next week to advise Miller’s group and she is also in contact with Emmanuel Macron’s En Marche! in France and Poland’s Committee for the Defence of Democracy.

The Canadians found that the term “tactical voting” polls badly because voters associate it with deception, whereas “strategic voting” sounds smart. Miller says the success of the operation in Canada in mobilising voters, particularly younger ones, surprised the pundits.

“The media and the polling experts all said it wouldn’t work. And what was different was actually the engagement on the ground. That’s why we’ve got to get on the ground,” she says, adding that the remnants of last year’s Remain campaign are eager to get involved.

“There’s a huge army there and they’re ready. And they’re ordinary people, they’re not politicians. They’re the ones who can change it, not the people in Westminster, not us, not the politicians and not the media.”

Miller, who defines success as keeping the Conservative majority below 50, will target up to 50 seats, choosing only candidates with a real chance of winning. Each candidate will have to promise to back a meaningful vote on the final Brexit deal, with three options – accept the deal, reject it and leave the EU without one, and remain in the EU.

Dismissing rumours that she will stand against May in her Maidenhead constituency, Miller says she will not stand in next month’s election but will not rule out a political career in the future. A member of the Labour Party, she is disenchanted with Jeremy Corbyn’s leadership and plans to resign from the party “when I get around to it”.

She believes that a new party will emerge after the election, bringing together centrists in the Conservatives, Labour and the Liberal Democrats, as well as people who have never been involved in politics before. And although she accepts the result of last year’s referendum and insists she is not attempting to thwart it, Miller and her allies are confident that the British people will start to question the kind of Brexit May is leading them towards.

“The tide will turn, we’re absolutely certain of that. The illusions are still there but the veils are falling. It is starting to dawn on people. The question is if we have the time,” she says.