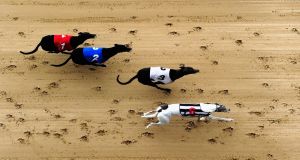 The GRAI told members that Ireland needs a tracking database for greyhounds so that all deaths and changes of ownership will have to be accounted for. Photograph: Jamie McDonald/Getty Images

The Oireachtas Agriculture committee has heard that greyhounds are being shot, mutilated or drowned because they are no longer of use to the dog-racing industry.

During an appearance at the pre-legislative scrutiny phase of the Greyhound Industry Bill 2017, Aideen Yourell of the Irish Council Against Bloodsports described the cruelty she claims to have seen inflicted on dogs that are deemed too old or runt puppies.

“They can be killed in all sorts of fashions. We’ve had incidents of finding them shot, ears cut off and brutalised, drowned or sold on to live in appalling states,” she told the legislators present.

The new Bill brought forward by Minister for Agriculture Michael Creed includes increased provisions around the welfare of greyhounds and prohibits the use of some performance-enhancing substances being given to the animals.

Una Jansen of the Greyhound Rescue Association of Ireland (GRAI) said almost 3,000 greyhounds are submitted to pounds every year, the majority of which end up being euthanised.

Ms Jansen added that this figure likely only represents a minority of all euthanisations as most are performed privately by vets.

Her colleague Jessica Reid described the “emotional blackmail” employed by some trainers who are eager to dispose of their animals.

“We’ve had trainers say to us: ‘If you can’t take this dog this week, he gets the needle’.”

Various members of the committee expressed support for the greyhound racing and coursing industries, including Fianna Fáil TD Jackie Cahill who is director of the Thurles Greyhound Stadium.

Mr Cahill said the vast majority of greyhound owners take good care of their animals, and pointed to 2013 figures showing that fewer than 1 per cent of racing dogs tested positive for banned substances in 2013 as evidence that claims of widespread doping are “a myth”.

Kerry-based Independent TD Michael Healy-Rae concurred with the points made by Mr Cahill, saying: “The one thing that I’d like to put on record is the fact that the people who I know are people who love their greyhounds, they love what they do, they take care of their dogs, and they’re genuine committed people. They’re not blaguards.”

The GRAI told members that Ireland needs a tracking database for greyhounds so that all deaths and changes of ownership will have to be accounted for. This would allow for trainers or owners who cannot account their animals to be properly punished, it was added.

Referring to the almost €100 million of exchequer funds paid to the greyhound industry between 2010 and 2015 Ms Jansen encouraged the reallocation of some of this money to trusts which re-home unwanted greyhounds whose racing careers are finished.

Representatives of the Irish Council Against Bloodsports said declining attendances and the closure of some tracks prove there is no longer an appetite for greyhound racing in Ireland following high-profile cases of animal neglect, and that the industry “has gone too far to be saved”.

Responding to animal welfare concerns raised during the meeting, a spokesperson for the Irish Greyhound Board said it conducted 571 inspections of greyhound kennels last year which resulted in 20 sanctions being imposed.

He added that the mistreatment of greyhounds is not tolerated in the industry.