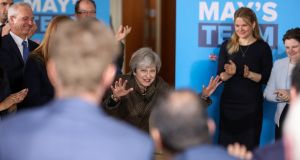 Theresa May has sought to turn Emmanuel Macron’s victory in France to her own electoral advantage, telling supporters that she needs a big mandate to match his. Speaking at a campaign event in Harrow, northwest London, the prime minister suggested that Mr Macron’s landslide defeat of Marine Le Pen would strengthen France’s hand in negotiations over Brexit.

The incoming French president will not be directly involved in the Brexit negotiations, which are being conducted by the European Commission’s Michel Barnier on behalf of the remaining 27 European Union member states. Mr Macron has suggested, however, that he wants to renegotiate the bilateral Le Touquet border deal, which allows British immigration officials to operate in Calais and stop would-be migrants arriving in Britain.

Ms May, who has long claimed that the agreement would be unaffected by Brexit, acknowledged on Monday that it was up for negotiation.

The prime minister said the Conservatives would continue to commit to a target of less than 100,000 for annual net immigration to Britain, one-third of the current rate, although she declined to say if it could be achieved during the next parliament.

An ICM poll for the Guardian on Monday gave the Conservatives their biggest lead over Labour since 1983, with 49 per cent compared to Labour’s 27 per cent. The prime minister has refused to take part in a televised debate with Labour leader Jeremy Corbyn but she will participate in a BBC Question Time special, during which the party leaders will separately face questions from a studio audience.

The Conservatives on Monday attacked Mr Corbyn for suggesting that Karl Marx was an important economist, dubbing him and his shadow chancellor John McDonnell “the Marx brothers”.

Mr Corbyn was asked on Monday about Mr McDonnell’s statement on Sunday that, although he was not a Marxist, he had learned a lot from Marx’s Capital.

“All great economists influence all of our thinking. Yes I have read some of Adam Smith, I have read some of Karl Marx, I have looked at the words of Ricardo, I have looked at many, many others. I don’t consider myself the world’s greatest intellectual but you learnt from everybody, don’t close your mind to the thoughts of others – that way we’re all better informed,” the Labour leader said.