Martin critical of Taoiseach over cut to mental health budget 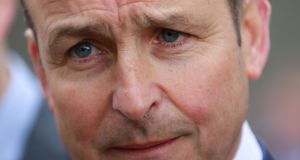 Micheál Martin said while €35m was set aside for mental health services in the budget, this actually translated to €15m in funding. Photograph: The Irish Times

Freedom of Information documents released to The Irish Times detail the correspondence between Mr Martin and Mr Kenny since February 2016. A letter sent from the Fianna Fáil leader on December 2nd strongly criticised Mr Kenny’s failure to adhere to an agreement reached between the two parties.

He wrote: “This is not consistent to what was agreed in the confidence and supply agreement, and the allocation does not allow for any new service to be developed in 2017.”

The Fianna Fáil leader said this was a very serious matter, which required a prompt resolution. He requested a meeting with the Taoiseach to discuss the “deeply disappointing” budget.

Mr Kenny did not respond to the letter from Mr Martin, but a meeting was scheduled between Minister of State for mental health Helen McEntee and the Fianna Fáil spokesman in this area James Browne.

A spokesman for the Fianna Fáil leader said his position remained the same as outlined in the letter.

He added: “Despite various assurances, Fianna Fáil continues to be unhappy with the Government’s failure to properly invest in mental health services as reflected in our Private Members’ Bill in Dáil Éireann this week. We will continue to press the case until we achieve full delivery of the commitments made in the confidence and supply agreement.”

Fianna Fáil agreed a number of policy measures with Fine Gael to facilitate the retention of the party in government.

Mr Martin stressed the implementation of the recommendations in A Vision for Change, the Government’s framework for the provision of mental health services in Ireland, must be enforced in order for his party to continue to support the Government.

The two party leaders also discussed the implications of Brexit, the Dublin-Monaghan bombings, a commission of investigation into the Project Eagle sale by the National Asset Management Agency and the need for a public inquiry into the case of Shane O’Farrell, who was killed following a hit-and-run in Co Monaghan.

Mr Kenny wrote to Mr Martin in September 2016 seeking support to introduce reforms to the Seanad. The Taoiseach proposed an implementation group to oversee the changes to the workings of the Upper House. Mr Kenny wrote it should be based in the Oireachtas and comprise of TDs and Senators with the assistance of expert advice.

Mr Martin agreed with the proposal by the Taoiseach, insisting reform had been on the agenda for too long and the Seanad required urgent change.

The Fianna Fáil leader said a timeframe must be established to ensure a speedy conclusion.

The implementation group has not yet been established.