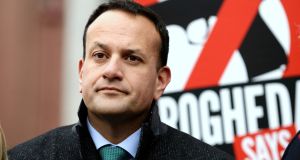 Taoiseach Leo Varadkar during a rally in Drogheda, Co Louth, to voice opposition to drug-related violence in the town on Saturday. Varadkar has again ruled out talking to Sinn Féin about a coalition government. Photograph: Caroline Quinn/PA Wire

Fine Gael will double down on its economic message and intensify its attacks on Fianna Fáil as the general election campaign passes the halfway point and enters a crucial and perhaps decisive week.

Senior Fine Gael sources acknowledged the findings of a number of published opinion polls that the party is struggling to make the case for re-election to many voters, but say that they will not alter their strategy to focus on the economy and Brexit.

However, several senior sources said that the party would increase the volume and frequency of its warnings about returning control of the national finances and stewardship of the economy to Fianna Fáil.

But Fianna Fáil and other Opposition sources brushed off the Fine Gael warnings, pointing out that the message had failed to register sufficiently with voters in the early weeks of the campaign. Fianna Fáil sources said they would continue to prioritise public services and quality of life issues.

Taoiseach Leo Varadkar again ruled out talking to Sinn Féin about a coalition government, but Sinn Féin leader Mary Lou McDonald retorted by accusing the “political establishment” of “desperately reaching for any excuse to exclude Sinn Féin” from government.

Following further opinion polls yesterday which showed Fine Gael trailing Fianna Fáil, there is growing nervousness, though not yet panic, in the party about the progress of the general election campaign.

A senior Fine Gael figure said that, on the canvass, “there are a lot of people talking about the money in their pocket” and that the party should start to talk to such voters more than it is now, since all parties have policy proposals that could be described as centre left.

“It has been a safe campaign, it hasn’t been exciting,” the Fine Gael source said. “Maybe we should go back to the man or the woman getting up early in the morning.”

Another source said Fine Gael will “dial up the risk and dial up the economy” and attack Fianna Fáil “bald headed” on its past economic record as well as its future proposals outlined in its manifesto.

Fianna Fáil is ready, it says, for the Fine Gael approach, which party figures believe will draw on Bertie Ahern’s successful campaign for a third term in 2007. Those in Micheál Martin’s party are prepared for an onslaught, or “Project Fear on steroids”, but say their approach will remain the same.

They will counter the economic argument with an emphasis on quality of life issues, health and housing as they seek to question what Fine Gael has done with the fruits of economic growth.

David Cullinane, Sinn Féin’s Waterford TD and public expenditure spokesman, said Sinn Féin is leading among the 50 per cent of voters he said do not want to vote for either Fianna Fáil or Fine Gael.