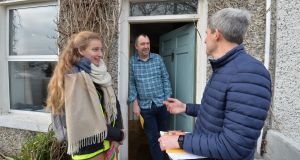 Liberties resident Colin Martin gives a hearing to Lana Bruens and Shane Roberts of climate action groups Extinction Rebellion and One Future during a joint canvass in the area. Photograph: Alan Betson

As a group of two dozen people collected pamphlets before fanning out and knocking on doors throughout the Liberties area of Dublin on Sunday afternoon, they looked like any other group out on the election trail, but there was a crucial difference.

The canvassers said they were not seeking voters’ support for any party or person, but for the environment.

In recent weeks, Extinction Rebellion Ireland (ERI) activists have been knocking on doors across the country highlighting the climate crisis and their view that tackling it should become a key election issue.

The climate change movement has been encouraging voters to ask one question of candidates: “Will you reduce Ireland’s greenhouse gas emissions by more than 8 per cent per year?”

That is the level of reduction scientists say is needed if the worst consequences of climate change are to be averted in the years ahead. The outgoing administration has outlined plans to reduce emissions by 2 per cent each year, a number ERI says is woefully inadequate.

The group said the election was “our only chance of ensuring meaningful climate action while there is still time” and stressed that if it was left until another election cycle “the challenges to prevent climate chaos will be monumental”.

Maria Arnold was amongst the canvassers on Sunday. She told The Irish Times the movement was not recommending people vote for one political party over another. “What we are asking them to do instead is to look at a party’s policies and their past actions and to make decisions based on that.”

She said voters had responded positively to the message and to “the fact that we are not doing this out of self-interest”.

“We have nothing to gain personally from our canvassing. It’s not like we’re going to get jobs in a new administration or a boost in our pensions. We are only thinking about our children and our grandchildren.”

She asked why 15- and 16-year-olds “should have all of the responsibility for climate action thrust upon them while us adults sit back and do nothing like it is the last days of the Roman Empire. ”

Jo Smith was talking about children too. She said she was out canvassing, in part, on behalf of her 13-year-old daughter, and said canvassing for the climate had allowed the movement to reach people who were “not aware of the climate situation and the crisis that the world is in”.

Most of those who answered their doors to the canvassers listened carefully and there were no angry words exchanged.

Andrew Clarke was among those canvassed although he was already “singing from the same hymn sheet”. He described climate change as being among “the biggest issues being faced and it needs to be talked about, but I don’t know if the short-term election cycle that we have helps”.

1 Coronavirus: More ‘striking’ evidence BCG vaccine might protect against Covid-19
2 This time, the future of the euro really is at stake
3 Coronavirus: Start date for more than 100 contact tracers delayed by 11 days
4 Meet the Irish woman leading New Zealand’s Covid-19 response
5 Coronavirus: Doctors fear Covid-19 yet to peak in the State as ICUs near full capacity
Real news has value SUBSCRIBE