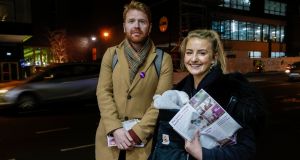 “Hello, I’m Lara,” the canvasser said as she introduced herself to the candidate. Lara O’Malley (32) holds her two-month-old daughter, Juliet, in a baby carrier as she shakes hands with Social Democrats Dublin Central candidate Cllr Gary Gannon.

Lara lives in neighbouring Dublin Bay North. She has never canvassed before but said, “I just really like what Gary stands for, his moral compass” and that “he is not afraid to challenge the status quo”.

It’s a good start to an evening canvass in the Drumcondra area for the candidate who by now has a number of elections under his belt.

He is the centre-left party’s best shot for a third Dáil seat along with joint leaders Catherine Murphy and Róisín Shortall.

First elected as an Independent councillor in 2014 in the north inner city ward and again last year for Cabra-Glasnevin where he now lives, he joined the newly formed Social Democrats in 2015. He came a close fourth in the then three-seater in the 2016 general election, 321 votes behind Independent TD Maureen O’Sullivan who retires at this election. And he raised his profile running for the party in the European elections.

Dublin Central is now a four-seater where Minister for Finance Paschal Donohoe and Sinn Féin leader Mary Lou McDonald are set to be returned. The two remaining seats are a battle between Gannon, Fianna Fáil’s Mary Fitzgerald, Neasa Hourigan of the Green Party, Labour’s Joe Costello and Independent Christy Burke.

People now know Gannon or have heard of him, helped by the distribution of 26,000 leaflets.

The canvass starts just after 6pm across the road from the Skylon hotel in Drumcondra.

Doorbells ring, and one older woman opens her door just enough to put her hand out to take the leaflet before quickly closing and chaining the door again.

“You can see how dark the streets are,” says Gannon of the poor street lighting. People do not feel secure – they want more gardaí on the streets. Crime comes up a lot on the doorstep.

Another woman opens the door in her dressing gown, smiles and takes a leaflet. When the candidate introduces himself and asks her to consider voting for him, she just smiles again and says thank you. No recognition there.

At a nearby laneway, somebody has just walked through the security gates of a middle-class estate. Gannon quickly catches the gate before it closes and the canvassers get through.

Gannon said he has not canvassed in this area before but the reception is so positive you start to wonder. And then the penny drops. This part of Drumcondra used to be in Róisín Shortall’s Dublin North West constituency.

In one of the first homes the door is opened by Breda Fitzgerald, who is a big fan of Shortall’s but no fan of Fianna Fáil or Fine Gael. “One is the same as the other and they’re all promises.”

She works in the bank and she made sure that a couple of younger colleagues registered to vote. “I told them: ‘You’ll be living with Mammy ’til you’re 50 and won’t be able to afford a house if you don’t get rid of Fianna Fáil and Fine Gael.’”

At another house a woman is holding her grandchild in her arms. The baby’s parents are both gardaí and have to work nights, and she is very concerned about childcare costs and access. But she tells the 32-year-old candidate that “it’s nice to see young people” getting involved in politics.

Canvasser Paul Reardon points out that we are in an estate that used to be part of All Hallows farm, close to where former taoiseach Bertie Ahern lives. A request to canvass Bertie – it would make a great photograph, says the photographer – catches the candidate on the hop. “I’d have to ask my campaign manager,” he says, reluctant. Then he remembers, relieved, the party canvassed there before and “we had to leave the leaflet with the garda” on security duty.

One householder talks about how he moved into the area so that his daughter could go to the nearby Dominican convent school; but she is on the waiting list and won’t get to the top by September, when she is due to start.

A woman in another house is concerned about local crime in Drumcondra and how “kids can’t play in Griffith Park any more because their bikes will be stolen”. There is no longer a Garda station in the area but she would like even a small place with a desk that was manned for a few hours.

Another man stops the candidate to talk about the waste of public money and how young people cannot afford a house because houses are being bought by cuckoo funds that don’t pay any tax.

The candidate does not have to say much about his policies, only to listen because the voters have plenty to get off their chests.

Gannon’s campaign manager, Sarah Clarken, who he met on his first day at college, comes back from canvassing a number of houses and says of one: “He doesn’t agree with your stance on inheritance tax”.

What is the stance? She answers that it has to be fair and equitable and “you can inherit €500,000 before you pay tax. You’ll be all right.”

At another door the householder has already spoken to one of the campaign team when the candidate introduces himself. The response is a polite smile, nice to meet him and he will read the leaflet. “I won’t be relying for a number one there. But maybe he’ll give a number two,” quips Gannon.

He goes to another house where a man in his 30s says he is interested in environmental issues and adds, “I’m giving you a lot of thought.”

Gannon says, “I think that means ‘I’ll consider you for number one unless someone better comes along to woo me’.” And after his 2016 close call he knows it takes a lot of wooing to win a seat.