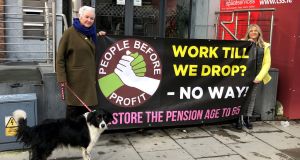 People Before Profit would restore the pension age to 65 to end the “daylight robbery” of State pensions under existing plans to extend the pension age, the party has said.

Publishing the party’s pension policy in Dublin on Sunday, Bríd Smith TD, a candidate in Dublin South-Central, said the party wants legislation repealed to prevent the pension age rising to 67 next year and to 68 from 2028 under past government plans to reduce the State’s future pension liabilities.

The pension gap between the compulsory retirement of workers at the age of 65 and the State pension coming into effect at 66 and 67 from next year has become major campaign issue with political parties scrambling to promise solutions to avoid retirees going on the dole.

“People are so angry because it is like the money they put into PRSI and social welfare system during their working lives is being stolen and most manual workers are tired by the time they are 65,” said Ms Smith, launching her policy outside the Pensions Authority in Dublin city centre.

“I meet building workers who are saying to me that ‘my body is physically wrecked. I can’t walk any longer’. Nurses, postal workers, anybody who just shift work in particular, they tend to have a shorter mortality rate and that means they deserve a longer period of retirement.”

The party has said each year’s increase in the pension age costs a worker €12,911 a year and that from next year, the State will save €25,822 for every worker in the country.

Ms Smith disputed the future “pensions timebomb” where there would not be enough young workers generating social welfare payments to pay the pensions of an ageing population. Ireland had the youngest population in Europe and that it would “more than likely” grow, she said.

Changes to the State pensions were prompted by emerging demographic trends in the State. The CSO has projected that the percentage of the population aged 65 and over will increase from 13.3 per cent in 2016 to 18.1 per cent by 2031 and to 24.6 per cent by 2051.

Ms Smith said: “Old-age pensioners have paid for the pension themselves and they deserve it. It is their money and it’s nothing but daylight robbery for the government to take it from them.”

She said many people will fall into a “huge poverty trap” if they have to depend on the jobseeker’s allowance, as they currently do, or lower income between the ages of 65 and 68.

Annette Mooney, People for Profit candidate in Dublin Bay South, said the party had heard lots of complaints from voters on the doorsteps about the issue.

“Almost half of the private sector will be depending on the State pension and what the government are telling them is to go on the dole. This is a shocking attack on workers rights,” she said.