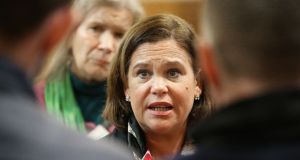 Mary Lou McDonald. After protesting at her exclusion from the head-to-head debates between Leo Varadkar and Micheál Martin, the Sinn Féin leader has the platform in this week’s debates to continue Sinn Féin’s early campaign momentum. Photograph: Nick Bradshaw

The swing voters are still silent as week three of the election campaign begins.

This cohort of voters – “the people who are not saying anything”, according a seasoned canvasser with one of the big parties – are keeping candidates guessing, but this coming, crucial week will have a huge bearing on who they will support.

There will be two seven-way leaders debates on television – with Claire Byrne on RTÉ One on Monday evening, and with Matt Cooper and Ivan Yates on Virgin Media One on Thursday night – as well as more manifesto launches and an effort by Fine Gael to pull the campaign back to where it believes its strength lies: the economy.

After protesting at her exclusion from the head-to-head debates between Leo Varadkar and Micheál Martin, Mary Lou McDonald has the platform in this week’s debates to continue Sinn Féin’s early campaign momentum.

The extra exposure, however, will also give Martin, Varadkar and others the chance to sway support away from Sinn Féin. Sinn Féin will publish its manifesto on Wednesday, with Labour a day earlier on Tuesday. Attacks on its policies will see Fianna Fáil try to prevent McDonald becoming the change candidate of the election and Fine Gael attempt to win back some younger voters who may be tempted to support Sinn Féin.

While weekend polls showed voters trust Fianna Fáil and Sinn Féin more on health and housing, Fine Gael still commands a strong lead on the economy and will try to make that issue a major theme this week.

Outgoing party TDs also say the campaign needs a jolt, a change in the dynamic that will mark Fine Gael out from its rivals.

Some senior party figures say Fine Gael needs to start talking to those who want “money in their pocket” – the cohort Varadkar identified as the people who get up early in the morning – while others say it will repeatedly attack Fianna Fáil on its economic record and trust.

Fianna Fáilers say they have been expecting this from Fine Gael – Fianna Fáil pulled a similar trick in 2007 when Bertie Ahern and Brian Cowen swung a late election victory based on Fine Gael’s then weaknesses – and are ready for “Project Fear on steroids”.

Martin will stick to his themes of fairness, quality of life issues, health and housing and question what Fine Gael has done with the economic growth of recent years.

Fine Gael is taking solace in the fact that Fianna Fáil has yet to pull clearly ahead in opinion polls. Fine Gael canvassers say that voters, while angry with the Government, are voicing doubts about Fianna Fáil.

Fianna Fáil sources concede they are encountering some doubters, but believe they are still on course to be the largest party in the next Dáil.

They also say Fine Gael’s core vote across the country is holding.

“There is no animosity to us,” said one local Fianna Fáil activist with decades of experience.

There is deep unhappiness with the Government, but when it comes to Fianna Fáil, the activist added: “There is a stop, a comma, if you get my drift.

“People are looking for something different, and can’t articulate what that is.”

The larger parties will also monitor any swing towards the Greens, although attacks on Green candidates may be more effective if done locally – on issues such as property tax, for example – rather than on the airwaves.

The silent voters will be stirring by next weekend, and the campaign over the coming days will be key in determining what way they move.