If Peter Casey performs as well as he did in presidential election, he could be elected 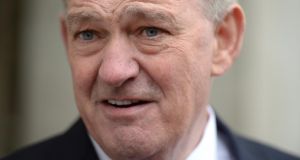 Where Peter Casey wins his vote and who he takes votes from, could be a factor in the final outcome. File photograph: Dara Mac Dónaill

Donegal is a five-seat constituency where Sinn Féin could make a gain. But it is also a constituency where a couple of dark horses, one a former Dragon with an outside chance of taking a seat, could upset the prospects of one or more of the main runners.

Four years ago, Fianna Fáil won two seats, Charlie McConalogue from Inishowen in the northeast of the county and Pat “the Cope” Gallagher from the Rosses in the southwest; Minister of State Joe McHugh from Carrigart won one for Fine Gael; Pearse Doherty from Gweedore came home as the single Sinn Féin TD; while Independent Thomas Pringle, from the southwest, after a ding-dong battle with Sinn Féin’s Pádraig Mac Lochlainn from Buncrana, took the fifth and final seat.

At the time of writing, all five outgoing TDs are standing along with Mac Lochlainn. In addition, there is Martin Harley for Fine Gael; Michael White who is a Green; Mary T Sweeney for Aontú, Independent councillor John O’Donnell; Peter Casey, a wealthy businessman and formerly one of the members of Dragon’s Den and a candidate in the last European and presidential elections as well as Niall McConnell, another Independent standing on a “drain the bog” ticket.

O’Donnell, chairman of Donegal County Council, is a controversial figure. In 2015, he was secretly filmed by RTÉ asking to be paid through a business partner for promised work on behalf of wind farm investors. While the Standards in Public Office Commission (Sipo) found he “conflated his roles as councillor and businessman and used his position as councillor in order to promote his private interests as a businessman”, he held onto his seat, topping the poll in his Milford electoral area with close to 2,000 votes in last year’s local elections.

It would seem unlikely he would take a seat but he could take votes from some of the other candidates.

Aontú and Renua will hope to gain some traction in the constituency.

The other not-to-be-ignored apparent longshot is Casey. If he were to perform as well in the constituency as he did in the presidential election when he won 12,952 votes, he would be elected on the first count.

But since then, his popularity has been dipping and while he can’t be ruled out, the main contest, as it was in 2016, appears to be between the five outgoing TDs and Mac Lochlainn.

Again, like O’Donnell, where Casey wins his vote and who he takes votes from, could be a factor in the final outcome.

Still, the final stages of the election count could be a rerun of 2016. Fine Gael should hold its single seat, that of Minister for Education Joe McHugh; Fianna Fáil also is well-placed to see its TDs, McConalogue and Gallagher returned; and Pearse Doherty would seem a safe bet for Sinn Féin.

At one stage during the final counts four years ago, there were just 36 votes between Thomas Pringle and Mac Lochlainn, and it took until the 13th count for Pringle to emerge as the victor.

The big mistake Sinn Féin made in 2016 was running a third candidate, which split the vote, costing Mac Lochlainn his seat.

This time, less greedily, Sinn Féin is running two candidates while Mac Lochlainn, a member of the Seanad, has maintained a high profile and worked diligently to get back to the Dáil chamber.

Pringle is a seasoned and hardened campaigner and won’t easily give up his seat, but this time the slight advantage could be with Mac Lochlainn.