On the canvass: ‘As long as we have someone from Longford in the Dáil; one person’

Longford is the only county in Ireland without a sitting TD. Local Fianna Fáil and Fine Gael candidates hit the campaign trail hoping to change that. Video: Enda O'Dowd 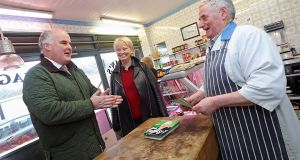 Longford, which has a population of about 40,000 people, is the only county in the country that does not have a sitting TD.

As Penrose has decided not to stand after nearly three decades as a TD, candidates from Longford are hoping they can claim the final seat.

“There’s a constant sense amongst people that we’re being left out and I think they want their voice back,” says Flaherty, who is currently on sabbatical from his position as regional managing director of Iconic Newspapers.

It is a quiet Thursday morning on Main Street in Longford town and inside Paul’s Key Cutting and Shoe Repairs shop is local man Eamon Farrell.

Farrell, who ran a pub in the town up until 2018, says “the downturn” forced him to shut his doors after over 40 years.

“There just wasn’t enough business,” he says. “It was heartbreak for me and my family after 43 years. I was the longest-serving publican in the town at the time. It was a sad day.”

He cites crime and anti-social behaviour as major issues affecting Longford town, adding: “At the moment, it [the town] is not in a good place . . . We need a TD, seriously; that’s it.”

Longford town had the highest unemployment rate (30.6 per cent) amongst the country’s large towns, according to the 2016 Census, while the county’s overall rate was 19.6 per cent.

However, the latest live register figures show 2,333 people were registered for jobseeker’s allowance or benefit in December 2019, down from 2,511 the previous year and 3,395 at the end of 2016.

Stan Hromada, originally from Slovakia, has been running O’Connor’s Florist in the town for the last eight years. He tells Cllr Flaherty business has been slow this month. “It’s been very quiet but you have to keep going,” he says.

Twenty kilometres away in Ballymahon, which is situated close to the new Center Parcs holiday resort, is another local councillor hoping to represent Longford – Fine Gael candidate Micheál Carrigy.

I see a huge sense of apathy, in particular among our youth cohort. They feel that we’re forgotten about

Carrigy, a postmaster and small shop owner, says there was “a bit of an anti-Government feeling” in 2016 which led to Fine Gael TD and Longford native James Bannon losing his seat.

The councillor says while Ballymahon has benefited greatly from the business and employment opportunities Center Parcs has brought, there are anti-social issues affecting Longford town and, as a result, people have stopped going into the town centre as much.

Carrigy’s own constituency office in the town was recently vandalised with eggs. He says he was “disappointed” by the incident but remains “undeterred”.

“I’m going to keep working, that’s my job, that’s why I put myself forward to be a public representative and that’s what I’m going to continue to keep doing,” he says.

“I know every road in Longford and I think it’s important that we have to have somebody at the table representing us there in the Dáil.”

‘Nothing here for them’

Grace Kearney, manager of Brideways family resource centre in Ballymahon, says Longford has been “forgotten about”.

“This could be a really great place for families to grow up, but unless we have the investment in intervention services and businesses, then that’s not going to be the case,” she says.

“I see a huge sense of apathy, in particular among our youth cohort. They feel that we’re forgotten about, that we’re on the back foot, they feel that there’s nothing here for them in Co Longford. They head off to college at 17 and 18 and loads of them never return.”

Mary Nally, of Ronnie Nally’s bar, disagrees. “It hasn’t been forgotten about, no; it’s just that you know towns at times go through bad patches and then they’ll bounce back,” she says.

“I just hope we get a seat in Longford. I mean, politics doesn’t bother me that much. As long as we have someone from Longford in the Dáil; one person.”

Both Fianna Fáil and Fine Gael are targeting a second seat in Longford-Westmeath, with a clear opening for a candidate from the Longford end of the constituency. Flaherty and Carrigy were elected on the first count in last year’s local elections in the Longford and Granard wards, respectively, with just over 100 first-preference votes between them.

Helen Feeney, a former prison officer from Lanesborough, says she doesn’t think it matters whether a Longford TD is elected or not.

“From what I’ve seen from what’s going forward, very nice people but their parties [are] letting them down,” she says.

“Over the years when we have had a sitting TD, we even had a taoiseach from our county [Albert Reynolds was a TD for Longford-Westmeath and Longford-Roscommon]. Was much done for Longford? I don’t think so . . . I think it’s extra guards that’s needed in this county rather than a TD at the minute.”