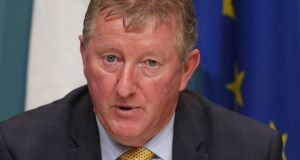 Sean Canney is one of two Ministers of State in the constituency and it is uncertain if he will get plaudits, or heat, for being in Government. File photograph: Laura Hutton/The Irish Times

Galway East looks like it will be a tussle for Tuam. Even though it’s a three-seater, it encompasses a huge geographical area, from Tuam in north Galway, to Kinvara and Gort in south Galway, to Loughrea and Portumna in the east.

The sitting TDs are spread at the points of a vast triangle: Anne Rabbitte of Fianna Fáil in the east, Ciarán Cannon of Fine Gael in the south, and Sean Canney, the Independent in the north of the county.

If there is a seat that is vulnerable, it is Canney’s. He has only been a TD since 2016 but holds a seat that was once held by a close political ally, Paddy McHugh, himself a former member of Fianna Fáil.

The constituency is predominantly a rural one but there are many urban and extra-urban issues. Tuam, Athenry, Loughrea, and even Gort and Kinvara are now satellite towns for Galway city and there are big issues around commuting and pubic transport (especially rail travel) – even though the M17 motorway dissecting the constituency north to south has been a huge boon. Agriculture, jobs in the more rural areas, and a lack of broadband connectivity are big issues.

There is no doubt Canney will be feeling the heat. He’s one of two Ministers of State in the constituency (Cannon is the other) and it is uncertain if he will get plaudits, or heat, for being in Government. He’s certainly a very hard constituency worker and that will work in his favour.

But there’s no doubt his seat is under pressure from the double threat of Fine Gael and Fianna Fáil, which are circling like competing sharks around him.

Tuam is the biggest town in the constituency and it’s certain that one seat will be decided there. And Fianna Fáil and Fine Gael can both point to positives from last May’s local elections. Fianna Fáil had a signal success in the Tuam electoral area, winning four out of the seven seats. But it dithered in its selection process. The two most obvious choices were either former TD Cllr Colm Keaveney or Cllr Donagh Killilea, a son of the former TD and MEP, Mark. It was only on Friday, January 17th, that it made its choice: Killilea was chosen. Did the party leave it too late?

Fine Gael chose Cllr Peter Roche months ago. He was the poll-topper in Tuam, winning 2,430 votes. It’s going to be tight. Canney by name, canny by nature. On paper, Fianna Fáil should pose a greater threat but Roche might have first-mover advantage.

A really close call, either way. Without any confidence.