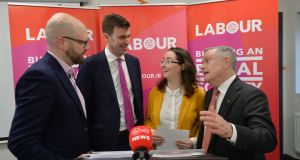 Regional communities are being “sucked into Dublin” causing misery for families, Labour leader Brendan Howlin said at the launch of a plan to create more regional jobs and cut congestion.

In a bid to appeal to the growing number of voters commuting longer distances to jobs in Dublin, the party said that, if elected to government, it would instruct the IDA and Enterprise Ireland to invest in regional hubs and move away from “city-centric” job creation.

“You can’t leave it to happenstance. You have to have a strategy and, bluntly, Dublin is bursting at the seams. We cannot have a situation where it just sucks in everything and the rest of the country is expected to commute into it,” Mr Howlin told reporters at an event in Drogheda.

Dublin-centric job creation was “causing hours of misery in terms of trying to trek in and out, in terms of transport, the problems of dislocating families, parents not being able to see their children, leaving early in the morning and coming back late at night,” said the Labour leader.

“We have to address that,” he told reporters at the launch of the plan, entitled Getting Ireland Moving, in a business enterprise centre in the Co Louth town.

The Labour leader cited employments statistics showing that three out of every five jobs created in the last full year of statistics were created in Dublin, while half of all graduate jobs went to the city.

Flanked by the party’s candidates in constituencies along the commuter belt around Dublin - Ged Nash in Louth, Annie Hoey in Meath East and Duncan Smith in Fingal - Mr Howlin said that the plan was designed “to improve the quality of life in commuter towns across Leinster. ”

“We have commuting levels in this area that are frankly unsustainable,” said Mr Nash.

There were more than 10,000 people leaving Drogheda, a town of 40,000 people, every morning to work in Dublin city centre in IDA-linked foreign direct investment companies, he said.

Instead of a three and a half hour or four hour commute every day, local people had an appetite to work within the community and to have a “better work-life balance,” said the Labour candidate who narrowly lost his seat in Louth in the 2016 general election.

Mr Nash said on the “M1 economic corridor” running between Dublin and the Border there were two million people and some of the richest and most densely populated parts of the country.

There had to be a “more balanced economic development” for the country, he said.