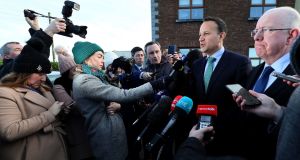 Violent crime has jumped to the centre of the general election campaign following further gangland shootings in Dublin and a stabbing in Cork city.

Two men were shot by organised criminals on an industrial estate in St Margaret’s, north Co Dublin, at about 11.30am on Friday.

The victims, who are involved in the haulage industry, were both shot multiple times and were seriously injured. One was wounded in the head and remained critically ill late on Friday night.

In an unrelated incident, Cameron Blair (20), a second-year engineering student at Cork Institute of Technology, was stabbed fatally in Cork City on Thursday night.

The 17-year-old was dismembered, and his remains subsequently recovered in two locations in north Dublin. The murder was part of a worsening gangland feud in Drogheda which has cost three lives. Gardaí are fearful the dispute has spread to include gangland figures in Dublin.

Taoiseach Leo Varadkar paid a visit Drogheda but his claim that “Fine Gael is the party of law and order” was ridiculed by opposition leaders, while local people told reporters they were scared to go out on the streets.

Mr Varadkar said he had come to the town “to assure the people of Drogheda that the Government is 100 per cent behind them and we are going to get these people behind bars and that we are going to make this town safe again”.

But the Fianna Fáil leader, Micheál Martin, said the Government was “losing control”. He said “drug terrorism” was as much a threat to society as the IRA had been in the past.

“These are not ordinary criminals and they deserve a much tougher legislative response. Legislation on gangs has not been changed since 2009 and only two people have been charged with directing gangland activity since 2006,” said Mr Martin.

“People deserve much, much better from their Government. It is four years since the murder at the Regency Hotel and there have been almost 30 drug gang-related murders since. We have reached a tipping point and these gangs have to be crushed.”

Solidarity TD Ruth Coppinger said it was “just ridiculous” to say social drugs use was enabling crime because people would not “just suddenly stop using drugs”.

She said: “I don’t think you can blame somebody for causing gangland crime through [recreational] drugs on a Saturday night. I think you have to deal with the causes of drug abuse which are very much social and class-based.”

Ms Coppinger said “you can’t deal with the demand for drugs with a Garda response”. It had to be treated as a health issue.

Meanwhile, Sinn Féin leader Mary Lou McDonald indicated her party could change its position on abolishing the Special Criminal Court subject to a review of the court’s operations.

Separately, Sinn Féin suspended its Tallaght councillor Paddy Holohan after claims he made about young girls pursuing men and then blackmailing them. The disciplinary action came a day after he apologised for questioning Mr Varadkar’s connectedness with Ireland because of his Indian heritage and saying a “family man” should run the country.