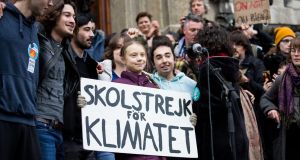 A leading expert on climate change Prof Barry McMullin has begun a campaign to have a separate TV debate among party leaders on the issue because of the scale of the resulting crisis facing Ireland.

The DCU-based academic has initiated an online campaign calling on RTÉ to host the debate, with leaders of all political parties participating “separately from any and all other general election programming, including any general leaders debate”.

Questions should come from a studio audience composed of a sample of citizens aged between 15 and 35 to reflect the disproportionate significance of the climate crisis for future generations, he suggested.

This approach was necessary because the crisis “is entirely different from all other issues in this general election campaign”. It was global in scope, raising genuine existential risk for the stability of all human civilisation within the lifetime of young people already of voting age, Prof McMullin added.

“It transcends and dwarfs the other issues: there can be no enduring solution to housing, healthcare, education, economic development, peace or justice unless there is a successful response to the climate crisis.”

For Ireland to now play even its minimal fair share in such a global response would require fundamental and disruptive changes in current political priorities, he noted.

“It is utterly impossible to do justice to this issue without a full debate devoted exclusively to this one topic, and driven by an audience selected explicitly to represent future generations who are entirely reliant on the decisions being made now.”

He quoted from a speech made last year by the Swedish climate activist Greta Thunberg; notably the “need to focus every inch of our being on climate change. Because if we fail to do so, then all of our achievements and progress will be for nothing.”

He reiterated her view that with such an outcome “all that will remain of our political leaders’ legacy will be the greatest failure of human history. And they will be remembered as the greatest villains of all time because they have chosen not to listen and not to act”.

The petition has been supported by more than 1,000 people in the 24 hours after opening on Friday. It is being compiled throughMy.uplift.ie

Coronavirus: Ireland plans for massive increase in tests 13:54
What is coronavirus and what should I do if I have symptoms? 13:54
Supreme Court restores 10-year jail term for man who raped his wife 12:45
Coronavirus: Italy-Ireland match is called off, IRFU confirms 14:41
Snow and ice forecast in northwest as flooded roads remain closed 08:40