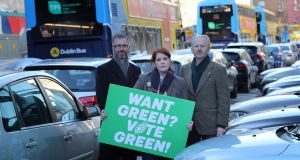 The Green party in government would extend the smokey-coal ban throughout the country, increase air monitoring in high risk areas, and roll-out an initiative to ban cars in the vicinity of schools by introducing temporary pedestrianisation.

The measures were announced on Friday at a briefing to outline the party’s air quality policy for Election 2020.

Extending the ban would bring a range of health, environmental and economic benefits, estimated at €53 million a year, it says. It is estimated that four people in Ireland die prematurely every day from illnesses relating to poor air quality.

“Considering the scale of our air quality problems, the number of monitors is completely inadequate, especially where communities are more at risk from air pollution by living near major fossil-fuel burning sites such as the M50 and Dublin Airport,” it adds.

A major scaling up of investment in public transport would be a red line in any negotiations on the formation of a government, according to candidates present.

Their air quality policy document was announced at one of Dublin’s air quality blackspots; the junction of Pearse Street with Tara Street in the city centre. An EPA monitoring station nearby indicates frequent breaches of EU safety limits – notably for nitrous oxides which are primarily associated with traffic.

The party’s transport spokesperson Cllr Patrick Costello said the air pollution threat was especially stark in the vicinity of schools. He had conducted research recently in Dublin South constituency that showed a doubling of nitrous oxide levels during term time due to traffic.

“We have some extremely worrying data in relation to the increase of air pollution caused by idling vehicles,” he added.

There was a need to make it safer for children to walk or cycle to school, while other research indicated they wanted to do so. He favoured a ban on cars idling outside schools.

Cllr David Healy, who is standing in Dublin Bay North, said the “school street concept” was being piloted successfully at St Oliver Plunkett’s School in Malahide with a view to be extended throughout the Fingal area. It involved pedestrianising the street when children arrive in the morning, and when going home in the evening and had already bring tangible benefits to the atmosphere outside.

Dublin Central candidate Cllr Neasa Hourigan said the EPA monitoring figures were “quite scary”, particularly because of the vulnerability of young children to air pollution.

There were solutions, as evidenced by what was being done in some EU countries and progressive cities, where there was investment in public transport including use of escooters and ebikes.

“People don’t want to sit in their cars but public transport must be accessible and affordable,” she added, while investment in active transport – walking and cycling – needed to be scaled up substantially.

She said congestion charges should be considered for Dublin but a lot of other measures – including increased pedestrianisation – could be implemented first.

On the possibility of free public transport Cllr Roderic O’Gorman, who is standing for the party in Dublin West, said there was a capacity issue which would make such a move impossible though he favoured free transport for students and reduced prices.