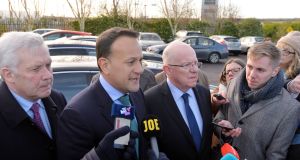 Crime continued to dominate the election campaign on Saturday as party leaders campaigned around the country.

In Cork Fianna Fáil leader, Micheál Martin took Taoiseach Leo Varadkar to task over his approach to handling violent crime, saying the Government has failed to recognise the changing nature of gangland crime in Ireland.

Mr Varadkar had defended the Government’s handling of violent crime in the wake of recent killings, pointing out the number of people murdered in 2019 was approximately 40 which was less than half killed over a decade earlier.

But Mr Martin said such comments failed to recognise the descent into ever more brutal and gruesome violence in Ireland as evidenced by the killing and dismemberment of 17-year-old Keane Mulready-Woods in Drogheda.

“I think that sort of response sums up the Taoiseach’s response to this – this isn’t about statistics, this is about more extreme acts and more extreme violence happening on our streets,” he said.

“Everyone was shocked at the dismembering of the body of a teenage involved with drug crime – he’s a 17-year-old and it’s quite savage and it reflected the worst of narco-terrorist type behaviour that we have seen in other countries.”

Mr Martin said murders such as that of Keane Mulready-Woods can not “be brushed away in the context of just another statistic” and its impact was evident in the fear and unease that people now felt about violent crime.

He said that people were particularly concerned about the trends highlighted in a recent Interpol study which showed drugs such as cocaine were now being pushed into the provinces by increasingly ruthless drug gangs.

Mr Martin on Friday claimed the Government was “losing control”.

He claimed that “drug terrorism” was as much a threat to society as the IRA had been in the past.

Taoiseach Leo Varadkar said here are fewer murders now than there were a decade ago, defending Fine Gael’s handling of crime in the wake of a spate of recent violence.

He said this did not however detract in any way from the seriousness of the crimes “we witnessed in the last couple of days which are unspeakable and appalling”.

The Government was working with the gardaí and others “to bring those who committed these crimes to justice.

“That’s why we put record resources into the gardaí, that’s why we re-opened Templemore which was closed by Fianna Fáil.”

Speaking at an event in the Rediscovery Centre in Ballymun to launch Fine Gael’s climate action election plan, Mr Varadkar said the figure for murders last year was about half that of 2007.

He added that there would be periods with spates of violence “but that does not mean that law and order has broken down”.

He said those who “committed those unspeakable crimes” would be brought to justice.

“There is real concern and worry about the spate of violent killings we’ve seen in recent days,” but the Government was getting on top of the situation by supporting An Garda and giving them unprecedented resources.

Gardaí had got on top of the gang-related violence in Limerick just as they had quelled violence in Dublin’s north east inner city, he said.

And that was why he focused on “reducing poverty, reducing disadvantage. And poverty is now down five years in a row”.

Elsewhere the Taoiseach welcomed indications that Sinn Féin may change its long held policy on abolishing the Special Criminal Court, describing it as “good news”.

The party campaigned three years ago to abolish the non-jury court but Ms McDonald said it should now be put under review rather than done away with.

McDonald had told media: “We absolutely accept that they have to have special provision to deal with these very violent crimes and these gangs.”

Speaking on Saturday evening during a canvass in Clonmel, Leo Varadkar said: “If Sinn Féin are reconsidering their position on the Special Criminal Court, I’d welcome that because they’ve opposed it for a very long time now.”

He added that the Special Criminal Court is “vital” for dealing with violent crimes.

“It’s how we lock up dissidents and terrorists and some of the really bad guys who are involved in gang related crimes,” he said.

The issue has dominated recent days of the general election campaign due to gangland violence in Drogheda and Dublin.

Violent crime has jumped to the centre of the general election campaign following further gangland shootings in Dublin and a stabbing in Cork city.

Two men were shot by organised criminals on an industrial estate in St Margaret’s, north Co Dublin, at about 11.30am on Friday.

The victims, who are involved in the haulage industry, were both shot multiple times and were seriously injured. One was wounded in the head and remained critically ill late on Friday night.

In an unrelated incident, Cameron Blair (20), a second-year engineering student at Cork Institute of Technology, was stabbed fatally in Cork City on Thursday night.

The 17-year-old was dismembered, and his remains subsequently recovered in two locations in north Dublin. The murder was part of a worsening gangland feud in Drogheda which has cost three lives. Gardaí are fearful the dispute has spread to include gangland figures in Dublin.