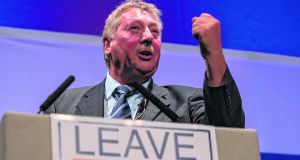 The DUP has accused the Government of being “hysterical”, self-centred and overplaying its hand on Brexit.

In a statement on Saturday, DUP East Antrim MP and Brexit spokesman Sammy Wilson strongly criticised comments made by Tánaiste Simon Coveney at Stormont on Friday.

Mr Coveney had said new British prime minister Boris Johnson’s approach to Brexit was “very unhelpful” and had put the UK on “a collision course” with Ireland and the EU.

“Only he can answer the question as to why he is doing that,” the Minister for Foreign Affairs added. “It has been made very clear from the Taoiseach, from Michel Barnier, from presidents Tusk and Juncker that the approach that the British prime minister seems now to be taking is not going to be the basis for an agreement. And that is worrying for everybody.”

In response, Mr Wilson said: “The hysterical and self-centred response from the Irish government to the reasonable demands of the prime minister to have the backstop removed from any exit deal from the European Union speaks volumes.”

Mr Wilson said the “megaphone reaction” demonstrated “blatant attempts by Leo Varadkar and Co to use the Irish border as a means of undermining Britain’s referendum has backed fired on them and they know it”.

He said: “The Irish Government walked the world stage and styled themselves as the victims of British aggression. ‘Poor little Ireland’ may have worked in the past but people are growing tired of the same old tune.”

“The game is up. They have overplayed their hand and they need to change course.”

He said it was clear if Ireland believes tariffs can be collected on goods travelling from the North to the Republic on the Border, there is “absolutely no reason why the taxes can’t be collected on the other side without disrupting trade flows or requiring physical infrastructure”.

“It’s very obvious that a deal which avoids the backstop is possible,” he added.

“Ireland’s own admission that it will not be imposing a physical infrastructure in the event of no deal, demonstrates there is no chance of a hard border being required or even happening.

“If there is any side which is to set itself on a collision course it is the EU and the Irish.”

He believes Mr Johnson “must stick to his commitment to leaving on the 31st October, it’s his best chance of getting a touch of reality in Brussels and Dublin”.

The DUP MPs said he would also be “enquiring as to who gave the Irish Foreign Minister access and permission to use Parliament Buildings for a press conference to attack the UK prime minister. If courtesies are going to be disrespected, then the matter will have to be carefully looked at”.

Mr Wilson did not address Mr Varadkar’s comments on Friday in Co Donegal that a hard Brexit would raise the issue of Irish reunification.