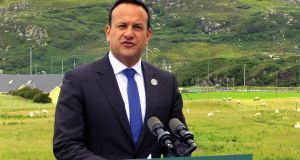 People in Northern Ireland will “come to question the union” with Britain if there is a no-deal Brexit, Taoiseach Leo Varadkar has said.

Mr Varadkar told the MacGill Summer School it would be “provocative” to discuss a potential united Ireland before Brexit, but said that could change if the UK crashes out of the European Union without a deal.

Preparing a white paper on unity or establishing a forum on the future shape of Ireland before Brexit could play into the view that Dublin is exploiting the UK’s withdrawal, he added.

“That obviously could change in the event of a hard Brexit,” he said.

“Those questions will arise whether we like it or not, and we have to be ready for it,” Mr Varadkar said about the future status of Northern Ireland in a potential no-deal scenario.

The Taoiseach was speaking during a public interview with Irish Times Political Editor Pat Leahy at the event in Glenties, Co Donegal.

He said moderate nationalists and liberal unionists may question being part of a UK which would potentially bring back the death penalty, in a reference to views previously held by the new British home secretary Priti Patel.

On the issue of Brexit, the Taoiseach again repeated that the existing Withdrawal Agreement will not be renegotiated.

Boris Johnson, the new UK prime minister, says the backstop, the insurance policy to avoid a hard border, must be abolished.

Mr Varadkar insisted that will not happen.

“We are not re-opening the [Withdrawal Agreement] but we have shown reasonableness and flexibility in the past,” he said.