Pat Leahy: Johnson’s objective is a majority in the Commons 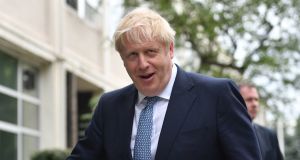 British prime minister Boris Johnson: he is hoping that in a general election his simple, clear Brexit message will win through in a fractured political landscape. Photograph: Jacob King/PA Wire

Boris is talking to British voters, not the EU. So now we know. Boris will not reach out to Dublin and Brussels, to Paris and Berlin, with a genuine and realistic desire to seek a deal. There will be no last-minute tweak to the backstop just substantial enough to get through the Commons, not so substantial that Leo Varadkar couldn’t stand over it.

Look at the cabinet, the staff appointments.

Dominic Rabb, who professed surprise that the port of Dover was quite important for British trade, as foreign secretary.

Priti Patel, who suggested that the troublesome Irish would be brought to heel by food shortages, as home secretary.

Dominic Cummings, who put the monstrous lie about an extra £350 million a week going to the NHS after Brexit on the side of the bus, in Downing Street to co-ordinate strategy.

As Spectator editor Fraser Nelson observed, this is not a cabinet to govern the UK – it’s a campaign team for a general election. This is a cabinet for the Great Brexit War.

The Brexit war will not be fought with Brussels, with its rules of engagement, its negotiation procedures and principles, its tiresome legal order. The war will be fought in the UK against the divided forces of Remain. Johnson eyes a general election he can fight as the man who will deliver Brexit.

He knows that Brussels will not entertain demands to dump the backstop wholesale; he knows that even if Brussels were willing to renegotiate the entire withdrawal agreement (a farfetched notion anyway) it couldn’t be done in the few weeks open to him.

All this he knows. So bear this in mind as the temperature of the rhetoric soars in the coming days and weeks – Boris is not talking to Dublin, he is not talking to Brussels. He is talking to the British electorate because he will go before it soon, probably in September once parliament either votes definitively against no-deal or passes a no confidence motion.

And look: on Thursday Facebook in the UK was flooded with over 500 versions of a Boris ad which invites readers to tell the new prime minister what your priorities are – all the better to target you with personalised, compelling messages during a general election. They are gathering data to prepare for a campaign.

Johnson has watched and waited and learned as Theresa May struggled, floundered and ultimately failed because of the lack of a House of Commons majority. It is her lack of a majority that has brought him to Downing Street. He knows he will not be able to govern without his own majority, so he must acquire one.

He must have an election, and the preparations – from the hardline cabinet to the staff and advisers whose expertise is in campaigning, not governing – are geared towards that. This means something else too: Brexit is not an end to Johnson, it is the means by which he comes to power.

Boris is betting that Brexiteers will flock to him, and that the hopelessly divided forces of Remain will be unable to oppose him – that his simple, clear Brexit message will win through in a fractured political landscape.

What does this mean for Dublin?

For one, it means the Taoiseach and his Ministers should not worry too much about what Johnson says right now.

Those who know his mind and his modus say the Taoiseach places great importance on personal contact and exchanges with other political leaders. He will meet Johnson soon enough and form his judgment about Johnson’s ultimate intentions – though the lack of a phone call (at the time of writing, anyway) speaks volumes about the state of the relationship between Dublin and London.

Yet for now it is clear that what Johnson is about has little to do with Dublin. Varadkar may learn less from the encounter than he fancies.

Secondly, the very real prospect of a no-deal at the end of October – greater now than at any previous time – means that the Government will have to turbo-charge its own no-deal preparations. Inevitably, though the scope of the effort is immensely broad, this will focus on the need for checks on goods coming into the Republic from the North.

The Government has been understandably reticent about this until now, but it will become much more urgent. Dublin will probably have to reject some of the more intrusive requirements from Brussels. But it will have to do checks, and it may as well tell us how and where.

Thirdly, the Government will have to prepare for the potential economic implosion of Northern Ireland.

The view in the Department of Finance is that a no-deal would be a serious blow to the Irish economy but a manageable one, and certainly nothing on the scale of the financial crash of 2008. Its impact would be very severe in certain sectors – agrifoods, principally – and geographic areas around the Border, yet not substantial in large parts of the economy. In Northern Ireland, however, the blow would be catastrophic.

This is a view shared by the North’s own civil service which has published, to little notice in Westminster, a hair-raising assessment of the destruction that a no-deal Brexit promises for the North’s economy and society in which the loss of 40,000 jobs is only the beginning.

The truth is Westminster doesn’t care enough about all that. And when the DUP’s votes are no longer needed, the Tories will not care at all. Dublin will need to.