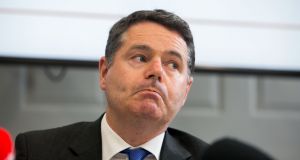 Minister for Finance Paschal Donohoe will likely be presenting his budget for 2020 in early October with a no-deal Brexit threat hanging over us, but still no clarity. Photograph: Gareth Chaney Collins

In one way, Boris Johnson’s tactics have made things more straightforward for the Government. Britain’s prime minister doesn’t want to reach any compromise deal on the Border backstop – and so there is no decision for Taoiseach Leo Varadkar and his Cabinet to make, and nothing on the table which might give them an awkward decision to make. If Johnson is playing the tactic of making unreasonable demands, blaming the European Union and Ireland for not agreeing and then calling a general election after the House of Commons blocks the move to a no-deal exit, then there is precisely nothing we can do about this.

But while this removes one strategic question for the Government, it creates a few others. A no-deal exit is far from a racing certainty, but it is clearly an increasing threat. Our political debate needs to wake up to this no-deal threat and the economic shock which could be coming at the end of October. Planning on this basis is far from ideal – a no-deal Brexit may yet be avoided. But to ignore the risk now would clearly be ludicrous.

Minister for Finance Paschal Donohoe will likely be presenting his budget for 2020 in early October with a no-deal threat hanging over us, but still no clarity. A potentially-crucial EU summit takes place shortly after the likely budget date. There doesn’t seem much point in delaying the budget. For now, we will have to assume a no-deal Brexit and just get on with it. If it turns out otherwise, then so much the better.

So the debate about the budget needs to turn on its head. Instead of arguing about how we distribute the fruits of growth, we need to look at protecting what we have. Forget the talk about tax cuts and €5 a week for all welfare payments. Forget plans for giveaways which might play well ahead of a general election – national or local. Forget the usual parade of Ministers dropping not-so-veiled hints that their patch is in line for a few extra bob.

Given the uncertainty Donohoe is likely to face – not only about whether a no-deal Brexit is about to happen, but also about exactly what it would mean, there is a strong case for him doing very little in the budget itself. There will be a need to prepare help for the sectors most exposed – and the Minister could use the budget to signal his plans and perhaps even get the appropriate spending approvals from the Dáil.

Flexibility will be essential. The size of the economic hit from a no-deal Brexit is debatable – and a lot of it may take place in rural Ireland. The wider impact will depend on business and consumer confidence, always hard to forecast. But a few key sectors stand exposed, notably the beef industry and some other parts of the food sector which would face delays, bureaucracy and in some cases sky-high tariffs selling into the UK market.

An immediate threat to farm incomes and to the future of a large part of the beef sector would present itself. Behind the scenes, the Government is developing a plan here, though this will need the appropriate state-aid clearances in Brussels. If a no-deal happens, bailing out the beef sector is going to be one of the biggest stories.

In presenting his outline plans for the budget recently, Donohoe said that a no-deal would mean acceptance that the exchequer would move from an expected small surplus next year into a deficit. This is because economic growth – and thus tax revenue – would be lower and there would be new demands on spending.

Sensibly, the Government does not plan to slash and burn other spending or hike taxes to try to keep the books balanced in the face of what cold be a sharp hit to growth. But equally it would be stupid to pretend that normal transmission can continue, either, or that it is in anyway useful to spend the next few months arguing about spending extra cash which we may not have, or making tax cuts we cannot afford.

Forecasts vary quite significantly on how serious a hit could come from a no-deal Brexit. Official Department of Finance estimates – not by any means the most pessimistic – see a threat over time to 50,000 jobs and a €6.5 billion swing in 2020 in the budget sums. If more pessimistic Central Bank forecasts are correct, the hit could conceivably be greater.

But by far the greater – and more significant – uncertainty is what happens after a no-deal. On one theory, such would be the upheaval to the UK economy that whoever was in government would quickly come back seeking a deal with the EU. However, who knows? Brexit will, without any doubt, make the UK considerably poorer over time than it would have been. But who knows how hard and chaotic the initial hit will be. A lengthy stand-off between the UK and EU after a no-deal could also occur, deepening the economic cost not only in the UK but also in Ireland. Johnson’s election also surely increases this risk.

There are opportunities for us, too, of course. Certainly in terms of a stable country in which to invest, Ireland looks a better bet right now than the UK. But in the short term the building uncertainty is sure to take a toll. The Government will most likely wait until September to make a call, but budgeting for a no-deal Brexit now seems the only way forward. This risks hitting business and consumer confidence – and will be politically very tricky – but having to adjust the budget plans suddenly after a no-deal takes place would be much, much worse.