Diaspora should be represented in Dáil, says Ciarán Cannon 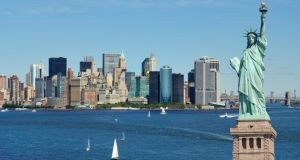 As many as 3.6m Irish citizens living beyond the Republic could be eligible to vote in the presidential elections in the 2019 referendum.

Irish citizens abroad should be represented with their own elected official in Dáil Éireann, Minister of State for the Diaspora Ciarán Cannon has said.

The Government has already made a commitment to hold a referendum in June 2019 to decide whether to extend voting rights in presidential elections to Irish emigrants from 2025.

Mr Cannon said in an interview it was “absolutely critical” that this referendum was passed giving votes to the Irish abroad. But he went further saying that the Government should be “at least exploring the opportunity of moving beyond that” and extending representation of the diaspora to the Dáil.

The Fine Gael junior minister said that former taoiseach Enda Kenny appointed Chicago-based restaurateur Billy Lawless, who is originally from Galway, as a Senator representing the Irish abroad. “I would equally argue that they need to have a voice in the Dáil,” said the minister, though he added that this was a personal opinion and had not been discussed by Government.

Asked whether “a diaspora constituency” might be the best way to provide representation to the Irish abroad in the Dáil, the Minister of State at the Department of Foreign Affairs said: “Perhaps something like that.”

As many as 3.6 million Irish citizens living in Northern Ireland and overseas could be eligible to vote in the presidential elections in the 2019 referendum.

Mr Cannon is also examining ways of making it easier for emigrants returning home. That includes the possibility of providing “a unique grant” for returning Irish citizens or their children to study in Irish universities and colleges so they don’t have to pay considerably higher EU or international fees.

“A grant that will apply to them and them alone – that is something that we should explore,” he said.

Mr Cannon said he will introduce a strategic plan to reduce barriers for returning emigrants after the economic research body, Indecon, completes a Government-commissioned report on the issue next month.