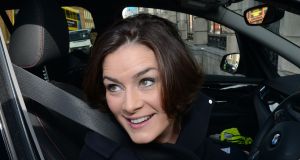 Fine Gael’s Kate O’Connell: “It is the job of the Fine Gael members of the committee to bring our party colleagues with us on that journey, and explain to them why we have come to this position”

Fine Gael TD Kate O’Connell has urged members of the Oireachtas Committee on the Eighth Amendment to bring their political parties with them in allowing abortions up to 12 weeks.

Speaking at the launch of the Oireachtas committee’s report, Ms O’Connell said she would be seeking to convince her party colleagues to back the recommendations by the 21-member committee.

The committee recommended repealing article 40.3.3 of the Constitution and allowing the Oireachtas to legislate for terminations up to 12 weeks of pregnancy.

Fine Gael and Fianna Fáil have votes of conscience on this issue, meaning they are not bound by a party policy and can vote in accordance with their own beliefs. However, Ms O’Connell said she hoped the committee members would educate their colleagues about the “overwhelming evidence” supporting their decision.

“People often speak about a journey. It is the job of the Fine Gael members of the committee to bring our party colleagues with us on that journey, and explain to them why we have come to this position.”

Asked if he would seek to bring his party with him, Fianna Fáil TD Billy Kelleher said he would be a strong advocate for the repeal campaign. However, he insisted he could only speak as an individual member of Fianna Fáil, and would respect the rights of other members to advocate for a different position.

His colleague Fianna Fáil TD Anne Rabbitte, who voted against repealing the Eighth Amendment, said she hoped the general public would “get informed”.

Ms Rabbitte encouraged people to educate themselves about the issue, and to use their vote in the referendum campaign.

She voted in favour of replacing article 40.3.3 to allow for terminations in certain cases, including rape and fatal foetal abnormalities.

Sinn Féin was also questioned on its position on the Eighth Amendment as measures contained within the report go beyond its party policy. The three members of the committee from Sinn Féin abstained on the proposal to allow for abortions up to 12 weeks but supported the final report.

Cork North Central TD Jonathan O’Brien acknowledged he and his colleagues on the committee would face a challenge encouraging some party members to accept a more liberal policy.