Ministers can vote against holding referendum on Eighth Amendment 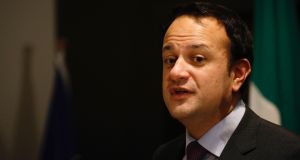 Taoiseach Leo Varadkar is not “ill-disposed” to Ministers voting against the Cabinet decision on holding a referendum on the Eighth Amendment. Photograph: Dario Pignatelli/Bloomberg

Government Ministers will be able to vote against the holding of a referendum on the Eighth Amendment, despite a Programme for Government commitment to facilitate one.

The Cabinet yesterday briefly discussed the Oireachtas committee on the Eighth Amendment’s report, which will be published today. Taoiseach Leo Varadkar urged all Ministers to take time over Christmas to consider its contents carefully.

The issue would be discussed in depth at the first Cabinet meeting of the new year on January 9th, Mr Varadkar told Ministers.

The Taoiseach informed them that the Government would need to bring forward a number of proposals in a relatively short period if it was to meet the commitment to hold a referendum on removing the amendment in May.

A spokesman for Mr Varadkar said the Cabinet would be required to agree a collective position on the Referendum Bill and the general scheme of legislation, which will outline what may occur if the Eighth Amendment was repealed.

However, once the Cabinet forms a position, Mr Varadkar is not “ill-disposed” to individual Ministers or Ministers of State voting against the Cabinet decision.

The spokesman said these were “exceptional circumstances” and this was a “very complex” process on a “contentious issue”.

The Oireachtas committee on the Eighth Amendment will publish its report today confirming its decision to repeal Article 40.3.3 of the Constitution and allow for terminations up to 12 weeks into a pregnancy.

The report says it is the committee’s belief the operation of the Protection of Life During Pregnancy Act has created significant difficulties, some of which can only be addressed if its recommendations are adopted.

The committee says it heard evidence that the certification and review process in the Act delayed women to an extent that they bypass the process and go abroad to have a termination .

On the circumstances where an abortion should be provided, the committee’s report says women find it difficult or impossible to report rape or sexual assault.

It ,therefore, has formed an opinion that it would be unreasonable to insist on reporting as a precondition to terminate a pregnancy that has resulted from rape or sexual assault.

“In view of the complexities inherent in legislating for the termination of pregnancy for reasons of rape or other sexual assault, the committee is of the opinion that it would be more appropriate to deal with this issue by permitting termination of pregnancy with no restriction as to reason provided that it is availed of through a GP-led service delivered in a clinical context as determined by law and licensing practice in Ireland with a gestational limit of 12 weeks.”

On the issue of fatal foetal abnormalities, the committee says scans should be available to all pregnant woman between the 18th and 22nd week of g estation.

It agrees a gestational limit on terminations in these cases is not an appropriate decision for committee to make given that ultrasound anomaly scans are generally not provided before the 20th week of pregnancy.

The three anti-abortion members are to publish their own minority report today.