Committee wants legislation to permit abortion up to 12 weeks 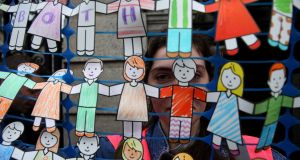 The Oireachtas Committee on the Eighth Amendment has concluded Article 40.3.3 should be removed from the Constitution and politicians should be allowed to legislate for abortion.

After three months of evidence and a series of votes, the committee stated the current regime for the termination of pregnancy is unfit for purpose and that constitutional reform is necessary.

Legislation should be prepared to permit terminations up to 12 weeks of pregnancy, without restriction, by way of a GP service, the committee says.

The report was published on Wednesday and was not without dissension. Three members failed to sign off on the report’s contents and produced their own minority report.

A number of other members, including two Fianna Fáil TDs and one Fine Gael TD, did not support all of the final recommendations as they went beyond their personal positions.

Speaking at the launch of the report, the committee’s chairwoman Catherine Noone said that she accepted the recommendations represented a major change for a significant amount of people. It would take time for people and other politicians to consider the report and how members reached the point they did, the Fine Gael Senator added.

The report concluded that legislating to allow for abortions in the cases of rape and incest would have presented significant challenges. It was its opinion that a verification process, to prove someone was the victim of sexual assault, was likely to be complex or even unworkable. Such a process could have caused further trauma to a victim, the committee found.

These difficulties and the availability of abortion pills led the members to agree abortions should be allowed up to 12 weeks of gestation, Ms Noone said.

In its final report, the committee concludes abortions should be allowed when a mother’s life or health is at risk.

Such a risk cannot be determined in legislation as it is dependant on individual circumstances and should be considered in a clinical setting.

The committee concluded that medical practitioners are best placed to make such a decision, subject to guidelines drawn up by the Minister for Health in consultation with the Medical Council and the Nursing and Midwifery Board of Ireland.

The members also agreed terminations should be provided when requested when the unborn child has a fatal abnormality that is likely to result in death before or shortly after birth.

Their final report stated it would not be appropriate to apply gestational limits given anomaly scans are generally not provided before the 20th week of pregnancy and further scanning and testing may be necessary when a diagnosis is made.

Terminations should not be provided when there is a foetal abnormality discovered that will not result in death.

There are a number of other recommendations made by the committee including the decriminalisation of abortion and removing the 14-year legal penalty.

The report reads: “ The committee is concerned that the criminalisation of the use of abortion pills in these circumstances has the potential to create a chill factor on women in seeking post-abortion medical care and support, thereby significantly impacting their health.”

It also creates a chill factor for doctors and clinical risk by distorting clinical decision-making, the committee said.

Sex education should be improved in schools, free contraception should be provided and improvements should be made to counselling and support facilities for women during and after pregnancy, the committee concluded.

Members of the committee insisted there was work to be done to convince their colleagues and the general public of the necessity to support their recommendations.

Fine Gael Senator Jerry Buttimer said the committee should not be presumptuous to believe its proposals would be warmly received, while Sinn Féin TD Louise O’Reilly said it would be a hard referendum to win.