International media ‘did not understand the complexity of the situation’

Catalans vote on December 21st in an election that could either bolster or sweep aside the region’s ambitions of breaking away from Spain, after a deeply polarised campaign. Video footage: Reuters 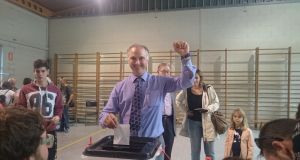 Albert Llussa, who flew back to Barcelona to vote, says holding the Catalan independence referendum on October 1st was not a crime.

On the final Friday of September 2017, two days before the referendum for Catalonian independence, human rights lawyer Albert Llussa caught a flight from Dublin to Barcelona. He arrived into a city teeming with journalists from across the globe, eager to capture the mood of a region potentially on the brink of historic change.

Llussa continued his journey into central Catalonia to the city of Manresa where he met with friends and family to discuss plans for the following day. His brothers had already signed up to volunteer in local schools and helped Llussa, who has lived in Ireland for more than two decades, find a spot where help was needed. He arrived at the school at lunchtime on Saturday and stayed there until the following morning to ensure the vote could take place.

“The police never arrived at my polling station. It was frightening to hear reports, as the referendum day progressed, of police brutality. It was surreal to be in a polling station in 21st-century Europe trying to exercise my right to vote and doing so in fear and anxiety.”

Llussa says holding the Catalan independence referendum on October 1st was not a crime.

“The organisation of the referendum was fully lawful and legitimate under international human rights law,” he says, adding that police intervention at polling stations was a breach of Catalans’ right to “peaceful assembly, freedom of expression and participation in a political process”.

Back in Ireland, Emilio Albacete was watching the news from Catalonia unfold on his computer screen. While Albacete detests violence, he understands why the Spanish police responded the way they did.

“The government didn’t send the police or the civil guard, they were sent by an order of the judiciary. I support what the Spanish authorities were trying to do; bring the region to the rule of law. Ensuring the compliance of the law sometimes requires force unfortunately.”

Albacete, who has lived in Ireland for 18 years and is from the Castilla La-Mancha region of central Spain, did not believe the imagery in some the videos emerging from Catalonia.

“The Catalan government reported more than 900 injured, but when we look at official documents, only three need medical attention. Policemen were provoked and a few of them were injured, but it seems most of the media were not interested in that side of the story.”

Like Albacete, Esther Lomas did not support the Catalan vote for independence. However, she completely disagrees with the violent response from the Spanish authorities. She believes the country should remain unified while simultaneously respecting its varied cultures and traditions.

“Spain was assembled through the merger of smaller kingdoms with long and distinct histories. Several of these regions have long-standing cultural practices, dialects and even languages. Catalonia is one such region. While most Spaniards have some sense of national identity, regional and local identities hold strong.”

Maria Ortega García, who is also from Castilla y León and works as a Spanish language teacher in Dublin, was in favour of the referendum but recognises the vote was illegal.

“For me the issue wasn’t whether the referendum should be valid or not. It wasn’t valid. But it has shown deeper problems that need to be addressed; a constitution that needs to be reformed, a government that has failed its job by ignoring the needs of its citizens.”

García believes most international media outlets failed to report on the views of the middle ground, choosing only to represent the voices of people ardently in favour or against independence.

“What I felt when I was reading the news is that they were stopping at the facts and did not understand the complexity of the situation. I have found the Irish press sometimes equate the Catalan independence movement to Irish independence which in my opinion have nothing in common.”

Carlos Vacas, who grew up speaking Catalan at school in Valencia and has lived in Ireland for seven years, followed updates on the referendum through both Spanish and international media outlets. He says most journalists failed to acknowledge the role of the economic crisis in the Catalan independence movement. While millions across Spain channelled their frustrations at austerity and unemployment through support for the left-wing Podemos political party, Vacas says many people in Catalonia turned to Carles Puigdemont and his party for guidance.

Vacas says the independence movement effectively “ignored half the population” in declaring an independent Catalonia.

Despite opposition from half the Catalan population towards the referendum, Llussa is glad he flew home to take part.

“It was important for me to go back and have my voice heard. As a Catalan citizen, I wanted to participate in my country’s right of self-determination.

“Whereas Spain sees Catalonia’s leaving as a threat to its sense of identity, Catalonia sees itself as being forced into a violent marriage. Spain sees us as a part of itself that it cannot let go of. The more Spain suppresses Catalonia the more likely the independence movement will increase.”