Northern politicians may have salaries cut by £13,600

Review recommends MLA salaries be reduced by 27.5% in absence of powersharing 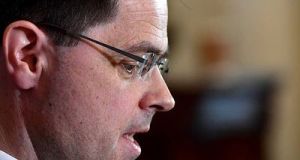 James Brokenshire: he requested advice on what would be the appropriate salary level for MLAs, “bearing in mind the balance between their constituency and legislative functions”. Photograph: Getty Images

Northern Ireland’s 90 Assembly members in the absence of a return of Stormont appear set to see their pay cut by more than £13,600 or more than a quarter of their current salaries.

The former clerk and chief executive of the Northern Assembly, Trevor Reaney, has recommended that Assembly members’ salaries be reduced in two stages from £49,500 to £35,888.

Due to the fact that the powersharing administration has not been functioning for almost a year, the Northern Secretary James Brokenshire last month asked Mr Reaney to carry out an assessment of Assembly members’ pay.

Mr Brokenshire requested advice on what would be the appropriate salary level for MLAs, “bearing in mind the balance between their constituency and legislative functions”.

He said the first 15 per cent reduction should take place “now” and the second 12.5 per cent cut in three months’ time.

Mr Reaney said the most recent relevant research found that on average an MLA spends 27.9 hours per week on constituency work out of a total working week of 50.8 hours.

“It therefore follows that some adjustment in salary is required, but not such as would treat MLAs disproportionately nor precipitate a significant number of resignations of MLAs at a time when an early restoration of a fully functioning Assembly is being sought,” said Mr Reaney in his 22-page report published on Wednesday.

“Such a potential loss of political experience would also do a great disservice to the future of devolution and consequently to Northern Ireland society as a whole.”

Mr Reaney said feedback received during his review indicated that MLAs were “largely diverting their unused time from parliamentary work to constituency work, and that there is in many constituencies an increasing demand from the public for such services”.

Mr Reaney pointed out that there was a precedent for cuts in Assembly members’ salaries. During the suspension of the Assembly between 2002 and 2007 the salary of an MLA was reduced to 77 per cent, or from £41,321 to £31,817, for most of that period.

Department of Education clashes with research agency over future direction 01:01
RTÉ receives complaint from union after ‘issue’ with spokeswoman’s accent 01:00
Election 2020: Fine Gael and Fianna Fáil set to reveal spending plans worth billions 01:00
Clontarf tenant says her garden was ‘destroyed’ without warning by Irish Rail 01:00
Business made payments to Fianna Fáil candidate and wife as Revenue debts rose 01:00
SUBSCRIBER ONLY