A ‘Leitrim tragedy’: When a tell-tale corpse pointed to the culprit

In 1902, a dispute between father and son boiled over following a hasty marriage offer 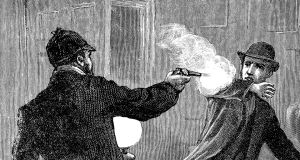 An argument over a marriage proposal between a Leitrim farmer and his son boiled over in 1902. Photograph: iStock/illustration/file

James Doherty hauled the body of his son, Pat, from the front yard of their Co Leitrim farmhouse and in through the front door. Helped by his brother Anthony, James laid the body out in the kitchen.

The 25-year-old had sustained four gunshot wounds. Two bullets entered his face, one hit his wrist and another went through his heart. One of the shots had passed clean through his right hand as he held it up in a fruitless effort to defend himself.

Pat was dead, yet his arm remained stiffly in a shielding position. Anthony tried his best to move his nephew’s hand from his face, but rigor mortis had already set in, “and the hand again rose slowly to its original position, as if denouncing the murder”, according to an Irish Times report.

On seeing this, James fell to the floor and apparently had a seizure, “as if struck with remorse”. Early the next morning on March 23rd, 1902, the sixty-something farmer travelled a short distance to a neighbour’s house and reported the sad story that Pat had shot himself and jumped from a bedroom window to his death.

The police, on attending the scene and examining Pat’s body, found the “skull had been smashed almost to pieces, one of his eyes was lost, and a bullet partly imbedded in the woodwork over the window through which the deceased had jumped.”

“A bullet had entered the head of young Doherty over the right eye, and lodged in the base of the skull,” according to a doctor named Delaney from Carrick-on-Shannon, who summarised the injuries.

Dr Delaney also noted the tell-tale hand, “which was raised as if for protection”.

The young man’s father pleaded his innocence, insisting his son had fallen in with the wrong crowd in recent times and had, on the night, taken his own life. The nature of the injuries and reports of a fractured relationship between father and son led police to charge the farmer with murder.

The story above and particulars of the trial are detailed in a report published in The Irish Times on December 4th, 1902.

In the months before Pat’s death, the pair had fallen out over a number of issues, the first being an accusation by the father that Pat had tried to sign himself ownership the farm with a forged deed. James also accused his son of tampering with the lock of his shop - a claim for which a police officer named as Sgt Glynn could find no evidence.

The dispute escalated in January, according to the Sergeant, who gave evidence for the prosecution. “Prisoner” in the following passage refers to James, while Sgt Glynn was the “witness”.

“On 10th January,” reads a report in The Irish Times, “the son informed witness that his father had attempted to strike him with an iron hook. Some argument then took place, and prisoner said to his son, ‘I will fix you at last.’

“Prisoner also said on another occasion that he thought his son was going out of his mind. On the 14th January witness was in Carrick-on-Shannon and prisoner told him that he would give his son £50 down and £50 afterwards if he would leave the place.”

James went on to request a revolver licence from Sgt Glynn, which wasn’t granted.

A deal was reached between father and son for a separation, and Pat was told he was allowed stay in the house until May.

The true boiling point came a short time later, when the elder Doherty announced his intention to marry.

A woman named in reports as Mrs M McDermott recalled a conversation she had with James, when he asked her if he knew “of a girl he could marry”. Mrs McDermott told him about a young woman named Holland, who was employed in Carrick-on-Shannon.

Census records from 1901 note a woman named Mary Holland, who worked as an assistant for a family named Harvey in Carrick-on-Shannon. By some accounts, Doherty was as old as 65 when he made his offer of marriage - some 40 years older than Mary, who was about 25 or 26 at the time.

Doherty tried to make a deal with Ms Holland’s father - if she married him, he promised her the entire 56 acre farm.

Sgt Glynn, at this point, said Doherty “asked for some police to guard his house, as he was afraid that his son would do something to him on account of his marriage.”

Doherty asked Mrs McDermott to speak to the young woman about his offer, but Ms Holland declined to marry him, “as quarrelling in a family would never suit her” - though that wasn’t the only issue; the farmer was simply too old for her, she said.

Mrs McDermott, who had acted as a matchmaker, “received a letter from Miss Holland asking her to deny everything in respect to the suggested marriage, as no one knew anything about it except through rumour.”

James blamed Pat for sabotaging the marriage, telling police his son had threatened the Holland family in a bid to stop it.

“Some time afterwards the prisoner purchased a revolver from a man named Rodden and attempted to get a licence from the magistrates,” according to The Irish Times. “He told Rodden that he would be able to get a licence, although previously the police sergeant refused him.”

The physical evidence of the crime scene, as well as Pat’s extensive injuries, bolstered the prosecution’s account of events: that the shooting started in the house and then spilled out into the yard.

On examining the scene, Sgt Mallon found two bullet holes in Pat’s bed, one in the partition between the bedrooms and a bullet lodged above the window through which the young man was supposed to have jumped.

“A model of the window was produced, and counsel explained to the jury that it was plain the deceased was shot through the heart outside the house by his father.”

James Doherty was in fact tried months previously, but the jury had disagreed; the second time, in December, the jury took just 20 minutes to find him guilty of murder. Due to his “good character and old age,” they recommended mercy.

After the verdict was read, Doherty was asked why he should be spared death: “I am as innocent as the child unborn of the murder, my Lord,” he replied.

The judge, ignoring the jury’s recommendation, sentenced him to hang.

“My Lord , grant me a longer day,” pleaded Doherty.

“Take him away,” said the judge.

The Ulster Herald reports that in the weeks following his condemnation, “Doherty received daily visits from the Roman Catholic chaplain” and “paid the greatest attention” to his sermon.

Early on the morning of Tuesday, December 30th 1902, “Doherty walked firmly to the scaffold, and when the rope was placed around his neck he said: ‘Lord forgive me for my sins.’

“When the executioner, one of the Billingtons, drew the bolt, death appeared to be instantaneous.”

This story is part of the Lost Leads series - a revisiting of lesser-known stories that have made the pages of The Irish Times since 1859. What can you find? Let us know on Twitter: @irishtimes or @deanruxton. For more information on subscribing to the archive, see www.irishtimes.com/archive.

0:38 Solitary and elusive snow leopard spotted in the Himalayas