Carded! Bridge does not qualify as a sport, says EU court

The English Bridge Union, which took the case, expressed disappointment at the ruling 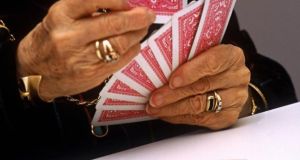 The court unusually reversed – or trumped — its advocate general.

Bridge, specifically duplicate bridge, is not a sport, the heartless European Court of Justice has ruled.

The EU’s Luxembourg-based court has ruled that although bridge is a competitive game that is beneficial to mental and physical health, a VAT regulation exempting sports should be understood in “everyday language” to define sport as an activity which includes greater physical exertion.

The court found that the UK tax authorities were entitled to levy VAT on bridge although it also advised that they might also be able to finesse the issue and help the game by recognising it as a VAT-exempted “cultural service”.

If the activity, its history and the traditions to which it belongs holds such a place in the social or cultural life of a country it may be regarded as part of its culture, the court said.

The court unusually reversed – or trumped — its advocate general who had recommended in June that the court find that the VAT exemption for sports was intended for activities which offered “training of mental or physical fitness in a way that is generally beneficial to the health and well-being of citizens”, and that bridge fits this category.

The court said that such characteristics, which it acknowledged, were not sufficient to define bridge as a sport. Duplicate bridge is a particular form of the game in which each pair successively plays the same hands as counterparts at other tables. Scoring is based on their relative performance.

The English Bridge Union, which took the case, expressed disappointment at the ruling and said it would inevitably add to the cost of tournaments.

The European Commission would not say more than that it welcomed the court’s clarification of the VAT directive and that it will give the ruling further study. It refused to be drawn on its attitude to the status of chess.

1 Coronavirus: What we know so far about how Ireland is affected
2 Coronavirus: Ireland plans for massive increase in tests
3 Woman (38) appears in court charged with murder of Garreth Kelly
4 What is coronavirus and what should I do if I have symptoms?
5 Garda Commissioner ‘stands over’ IRA-Sinn Féin remarks
Real news has value SUBSCRIBE