On your bike: Cyclist gives Donald Trump the middle finger 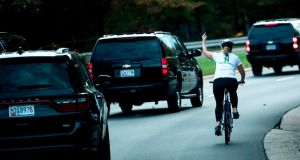 The cyclist gestured as the US president's motorcade passed. Photograph: Brendan Smialowski/AFP/Getty Images

The president of the United States is used to being saluted, but a cyclist in Virginia put her own particular slant on the tradition on Saturday when she was overtaken by Donald Trump’s motorcade.

The woman on her bike was photographed raising her middle finger when Mr Trump’s cavalcade passed her on its way out from the Trump National Golf Club on the banks of the Potomac river, on the outskirts of Washington DC.

She then repeated the gesture when she caught up with the motorcade.

The White House pool report noted drily: “POTUS’s motorcade departed the Trump National Golf Club at 3.12pm, passing two pedestrians, one of whom gave a thumbs-down sign. Then it overtook a female cyclist, wearing a white top and cycling helmet, who responded by giving the middle finger.

“The motorcade had to slow and the cyclist caught up, still offering the finger, before turning off in a different direction. Motorcade is now gathering speed and heading for DC.”

According to a report, Mr Trump has spent four consecutive weekends at his Virginia golf club.

He often criticised Barack Obama for playing golf while he was president and has subsequently faced accusations of hypocrisy for doing so even more regularly himself.