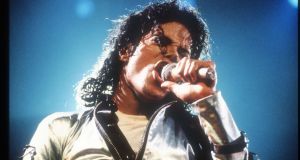 Michael Jackson sings at a concert on November 8th, 1988, in California, the US. File photograph: Jean-Marc Giboux/Liaison/Getty Images

The estates of the top 10 highest-earning dead celebrities pulled in revenue of nearly €250 million in total over the last year, according to an analysis carried out by Forbes magazine.

The Forbes list is topped by singer Michael Jackson, whose estate took in $75 million (€64.5 million) in the last year, eight years on from his death in 2009.

Singer Elvis Presley, whose name appears fourth on the list behind golfer Arnold Palmer and cartoonist Charles Schulz, actually increased in value, from earnings of $27 million (€23.2 million) in 2015/16 to $35 million (€30 million) across 2016/17, due to the opening of a new entertainment complex and hotel at Graceland.

The combined total for the top 10 dead celebrity earners amounted to $287 million for the period, or €246.6 million.

Appearing in the top 10 alongside the likes of Bob Marley, Dr Seuss, John Lennon and Albert Einstein are some recently deceased individuals, including singers Tom Petty and Prince, whose revenues topped $20 million (€17.2 million) and $18 million (€15.5 million) respectively.

Petty, who died earlier this month, was the only person to be included in the list who was actually alive at any point during the sampling period.