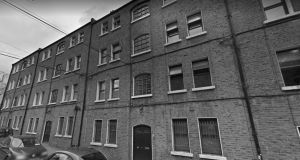 David Cummins arrived to Kilmainham police station a little after 7am, having walked the short distance from his home on Echlin Street in Dublin.

With a bowed head and using few words, he told the sergeant that his wife, Mary, had died suddenly in the night. She was about 40-years-old on the day her death was reported - February 22nd 1894 - and the pair had been married for 17 years.

Cummins was accompanied by John Murphy, his neighbour and caretaker of the Echlin Buildings, the block where the couple lived.

He reported the death to police as an “ordinary case of sudden death”. As Cummins spoke, the sergeant looked him over - Murphy excused his neighbour’s appearance: “Cummins was drunk last night.”

A Sergeant Masterson and Inspector O’Reilly went to examine the body but found what they quickly suspected to be a crime scene - “suspicions became excited as to the truthfulness of the husband’s statement,” reads a report published in The Irish Times on February 23rd that year.

Mary had suffered severe injuries. Her “face and chin were very black, and bruised in several places, and blood was flowing from the mouth and ears. Her clothes and hair were wet and disordered, and the floor of the room was deluged with water. The apartment was very much disarranged.”

Cummins was interrogated. He insisted he had nothing to do with his wife’s death, and that he found her in a pool of blood. He also said a paraffin lamp had tipped over and set the floorboards alight, hence he had doused the floor with water.

A brief investigation showed no signs of a fire, “but that on the contrary, a struggle must have taken place,” according to the report. Under the bed, police found a shirt that had recently been washed and a hatchet that had been steeped in water. A quantity of Mary’s hair was strewn about the apartment.

Cummins was arrested and brought to Kilmainham police station. He quickly was brought before court and charged with murder.

Insp O’Reilly gave evidence, reiterating the condition of the body. “She presented the appearance of having been violently used,” he said.

“None whatever from me,” interjected Cummins, who maintained his innocence throughout.

Over a number of court dates in February, March and April in 1894, conflicting accounts of what happened emerged.

John Murphy, the caretaker who accompanied the accused to the police station, said he heard the couple fighting the evening beforehand.

According to a report on April 16th, “he heard the prisoner say: ‘Damn it - is this what is for my dinner?’”. Later that evening, before 9pm, Mary called to Murphy’s door. David was drunk, and she needed help getting him to bed.

The next time he saw Mary was at 11.15pm, with “no marks of violence on her at the time. She had a slight scratch on her face, and appeared to be under the influence of drink.”

A few minutes after 6am the next day, Murphy was back at the apartment - this time, it was David that sent for him. Mary was face down on the floor in the living room, with her neck and head leaning against the open door to the bedroom.

The “witness, with the assistance of the prisoner, lifted deceased, and laid her on the bed in the bedroom.” He persuaded David to go to the police, and off they went.

Another witness, Bridget Grogan, lived not too far from the apartment, in the Parkgate Street area. David visited the Grogans’ house on the morning of the 22nd, and told them Mary had died, saying she “was drunk, had set fire to the place, and he threw a bucket of water on it to extinguish it. He further told her that the woman had fallen against the grate and broken her neck.”

Mary’s alleged alcoholism would be rolled out by Cummins’s defence team to support his story. David’s supposed “quiet” nature and seemingly happy marriage were also pointed to.

The Crown, however, contended David murdered her. Unfortunately, there were only two people, the prosecution said, who could shed light: “The prisoner, whose mouth was closed by reason of his position in the dock, and his wife, whose lips were closed by death.”

The case against Cummins was built on medical and technical evidence. Dr Thomas Myles, who performed the postmortem, said “the cause of death was a fracture of the spinal bone; in other words, her neck was broken and the spinal cord was divided.”

She had several contusions on the scalp, a small hemorrhage beneath the scalp and “one large hemorrhage on the extreme point of the head behind.” Other damage included hand marks on her neck and face and one wound on her skull, on the parietal bone. Her liver, too, had been ruptured.

“These wounds presented the appearance of having been recently inflicted,” he concluded, adding that “no slight violence” could have caused them.

“The body appeared to have been subjected to considerable violence that did not appear to be the result of accident,” he said.

He conceded that a very particular fall, if Mary had been drinking, might have produced the spine injury, due to relaxed neck muscles and considering the position she was found in. But all of her injuries, together, could not have been sustained in one fall.

“He wished to add that a fall against the wall, which might have broken the neck, could not simultaneously have ruptured the liver.” A second doctor, Robert Kenny, agreed with his assessment.

The Crown’s case was robust in terms of its use of forensic science. It included testimony from a London-based analyst, R J Moss, who examined hair, clothing, blood spatter and other items from the scene.

Despite David’s best efforts, Moss found “slight indications” of blood on the shirt which he had washed and stored under the bed. A second shirt recovered from the scene had not been washed, and showed “undeniable bloodstains”.

A candlestick was found with human hair entwined around it. There was no blood on the hatchet, but Moss did discover some on sheets found in the apartment and on the wall; there were “stains as if drops of blood had fallen on the wall and run down.”

This type of analysis, however, was limited in 1894. As Moss said himself, “the most distinguished analyst could not distinguish human blood from any other mammalian blood.”

In defence, Cummins’s barrister simply promoted the stories of Mary as a drinker and of his client as mild-mannered and “wholly unlikely” to have committed the crime. “The deceased woman had been for some twelve months previous to her death taken to drink, and on the night in question she was perhaps in that condition, which led to a fall, and to the injuries which caused her death,” the defence concluded.

The jury retired for 20 minutes and, in the absence of an admission or any witnesses, returned with a lesser verdict of manslaughter.

The judge asked David if he had anything else to say.

“No, my lord,” he replied. “I was always very kind to her. I had a great wish and a great liking for her since I met her seventeen years ago. We lived very happily. No one could have fretted more for her night and day than I did.”

The judge said regardless of his affection for his wife, “on the night in question, a fearful scene took place in (the Cummins’s) residence, and in which (his) wife was the sufferer.”

David Cummins was sentenced to 5 years in prison, to a shout of “hurrah” from the public gallery.

This story is part of the Lost Leads series - a revisiting of lesser-known stories that have made the pages of The Irish Times since 1859. What can you find? Let us know on Twitter: @irishtimesor @deanruxton. For more information on subscribing to the archive, see here: www.irishtimes.com/archive