A loaded gun and a deadly row over wandering cattle

James Flynn never held a revolver before, but on a summer night in 1926, he had a dispute to settle 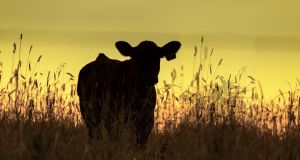 In 1922 in Co Waterford two neighbouring families were on bad terms ‘owing to the trespass of cattle’.

James Flynn had never held a revolver before. Using what little knowledge he had, he checked the chambers and was sure, he said, the gun was not loaded.

As he stood in a laneway near his house in Bishopscourt, county Waterford, on a summer evening in 1922, he wanted to scare his neighbour, with whom he had been fighting.

That year he was 46 and lived with his wife, three young children and three teenage servants. According to a report in The Irish Times in November 1923, he was a “well-to-do” farmer.

Mary Anne Gaffney lived nearby and, Flynn would say, was prone to swearing and giving him and his family abuse. He and she, to put it mildly, were “on bad terms, owing to the trespass of cattle on his lands”, according to The Irish Times.

In July 1922 he intended to end the dispute.

When Mrs Gaffney arrived up the lane, Flynn confronted her. He drew the revolver and pointed, “saying he would put it in her eye,” according to a report in the Sunday Independent from the week of the incident.

Mrs Gaffney made a move to grab the gun, Flynn stood back and a shot rang out.

Mrs Gaffney fell. Flynn fled, jumping over a nearby fence and running across the fields; he immediately discarded the gun and headed for the priest’s house.

A man named Patrick Sheehan drove by the scene moments later. There, he discovered Mrs Gaffney lying on the ground, blood pouring from her mouth and “beside her was a book - a novelette, opened,” according to a report in the Freeman’s Journal.

She was still alive, but died in the laneway after a short time.

Mrs Gaffney’s husband, Philip, was immediately called to Bishopscourt road. There, “he found the dead body of his wife. It was covered with blood and her hat was stuck to her head with blood.”

A doctor would later confirm a bullet entered Mrs Gaffney’s mouth and lodged behind her right ear, according to The Irish Times. Remarkably, he didn’t definitively say the bullet was the cause of death, adding that he believed Mrs Gaffney had a weak heart.

After running through the fields in the direction of Waterford, Flynn eventually reached the house of Fr Dowling. He then turned himself into the police barrack, reporting the death as a terrible accident.

He was charged with murder. Flynn maintained under questioning that he did not own the gun - armed men had arrived to his house and left a gun on his property, he insisted. Amid the outbreak of Civil War in Ireland, armed “irregulars” in the region were not uncommon; the prosecution alluded to unrest in the area during a court hearing at Green Street, Dublin, in November 1923 - more than a year after Mrs Gaffney was killed.

“At the date in question,” said Mr Carrigan, prosecuting, “there was a great deal of turmoil and unfortunately when what was euphemistically called Civil War prevailed there appeared to be very little regard for human life.”

Giving evidence, Philip Gaffney was asked, as implied by the defendant, if his wife had a bad temper - “I never saw it in 28 years,” he replied.

The Freeman’s Journal report details testimony by Michael, a son of Mary Anne and Philip. Revealing further tension between the families, he recalled being threatened by Flynn over a bull that had wandered into his field - he said “if the bull was not kept off the land he would ‘burst it up’ and ‘burst up’ (Michael) too.” During the argument, Flynn labelled Michael and his family “informers”.

Patrick Flynn’s daughter was called and she corroborated her father’s story about how he came to have the gun, saying when she lived at home, “there used to be a number of armed men about the place.”

Ms Flynn confirmed one of the men had left a gun behind them and that her father had found it. She also gave evidence, according to reports, of frequent complaints of cattle trespassing between the Gaffneys and her father.

As it turned out, the prosecution revealed, Mrs Gaffney did not actually own the cattle that had been straying onto Flynn’s land.

After the evidence was heard, the prisoner made a statement, again pleading his innocence and ignorance about firearms.

“I am innocent, my Lord,” he began, according to The Irish Times. “I never handled a revolver in my life.”

He described finding the gun in his hay shed and examining each bullet chamber- excluding, crucially, the one opposite the barrel.

“I went across to frighten Mrs Gaffney. I thought that when she would see the revolver, that she would not use scandalous or abusive language in the presence of my children,” he said. “She made a grasp at the revolver. I moved a step backwards. It went off.”

He finished by saying: “I am heartily sorry for what occurred - no man felt it more than I did.”

The jury found Flynn guilty of manslaughter and he was sentenced to 15 months in prison, on top of three he had already served.

In sentencing, the judge said he took the circumstances into consideration, but “he had also to protect human life; to teach people, farmers and others, that the reign of the gun was over, and that the gun could not be used against a defenceless woman, either to kill her or frighten her.”