Burglar or bungler? A chicken takeaway he won’t forget 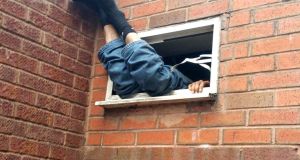 A man is being questioned about a suspected break-in after police found a person stuck in a takeaway extractor fan unit.

Officers posted a photo of the scene, showing a man’s legs, wearing jeans and black socks, poking out of the side of the DFC Chicken building.

The rest of the man’s body could not be seen, and he is thought to have been stuck for several hours, calling in vain for help.

A passerby saw a pair of legs sticking out of the building, in Rookery Road, Birmingham, and rang the police.

#dontgetstuck if your trying to break in. 5 hours later shouting help #triptocustody by all means 😂😂😂 pic.twitter.com/EzBvfyPM5b

Officers from West Midlands Police’s response team arrived and took the photograph, posting it on their @Responsewmp1 Twitter account.

The image was captioned: “#dontgetstuck if you’re trying to break in. 5 hours later shouting help #triptocustody by all means.”

PC Matthew Willocks, who took the photo, said: “The extractor unit had been removed and the suspect had climbed into the extractor outlet at around 2am. He was completely stuck and couldn’t move at all.

“The fire brigade had to come in and use the jaws of life to pull back all the extractor casing to release him.”

A 45-year-old man from Handsworth was taken to hospital for a check-up and was later arrested on suspicion of burglary.