‘We’re in the middle of a war,’ says Irish coronavirus ‘general’ 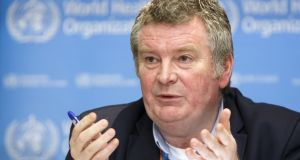 Executive director of WHO’s Health Emergencies programme Michael Ryan delivers an update on the situation regarding the coronavirus. Photograph: EPA

There’s a giant onscreen map of the world in Dr Mike Ryan’s office that keeps him abreast of the world’s emergencies. An alarming number of countries are coloured red or yellow, or marked with labels to indicate unfolding disasters such as war, hunger or the spread of infectious disease.

A massive ebola outbreak across central Africa refuses to go away, measles is ravaging the western Pacific, and there is a resurgence of lassa fever in Nigeria.

And then there’s Covid-19, the new coronavirus that has killed thousands in China and has spread to 25 countries, all lit up on the map.

The World Health Organisation’s Irish-born head of emergencies tells me that the WHO is currently tackling over 30 “events”, as disease outbreaks and natural disasters are termed, of which eight, including Covid-19, are graded the most serious. Yet just now the world only wants to talk about the virus that poses the biggest global health threat in 20 years.

If Hubei province in China, where the virus originated late last year, is the frontline of the war against Covid-19, the WHO’s offices here in Switzerland are the strategic headquarters for the fight to stop it going global.

As we walk through the building it seems as though everyone, everywhere, is looking to Ryan and his team for leadership.

In a corridor a staffer tells him the International Air Travel Association is seeking guidelines. Oh, and the International Olympic Committee want to talk about preparations for this year’s summer games in Tokyo.

Meanwhile, maritime groups have said they are worried about the impact of the crisis on the cruise ship business.

Like a cross between a TV producer and an army general, Ryan juggles his multiple responsibilities on the day I visit. Staff run up and down the corridors with clipboards trying to tear him away from his latest conversation or videoconference.

Military metaphors, and a few sporting ones too, are offered readily as he jumps good-humouredly from dealing with one crisis to another.

“We’re in the middle of a war [with this virus]. The Chinese have been just fighting this on the front line, tooth and nail, going toe-to-toe with the virus for the past 10 weeks,” he tells me, before switching battle terrains to describe where things stands currently as WHO experts travel to China to gather data.

“It’s like half-time in an international, where you need calm heads, and the smart people in the room say ‘we’ve been battering away at this for the last 40 minutes but have we really got the right tactics’?”

The basement of the WHO offices is home to its strategic health operations centre, where global public health events are monitored around the clock. On one floor a conference call on the situation in North Kivu in Congo, where ebola is still a lethal threat to the local population, is dragging on longer than expected.

Downstairs local and international media wait patiently for an update on Covid-19, delivered at a now daily press conference by Ryan and his colleagues.

Today WHO director general Dr Tedros Adhanom Ghebreyesus is also in attendance; earlier in the afternoon he had been bestowed with an honorary fellowship by a visiting group from the Royal College of Surgeons in Ireland.

A former health minister in Ethiopia, he opens with a prepared statement warning the “window of opportunity” now open for defeating the virus must not be “squandered”. There’s also a pitch for much-needed funding for the crisis, which has been slow to come in. (Ireland has stumped up €500,000 of the €100 million so far provided).

The coronavirus crisis has put the WHO under an intense spotlight. Some say it has not done enough; others that its response is excessive. The stakes are huge; decisions taken on public health grounds can have massive economic ramifications. Meanwhile, the spectre of a pandemic, out of control and global, is never far away.

“How do you deal with 194 countries, all of whose needs are different?” Ryan asks. “There’s China, with its thousands of cases. Then other countries who have just imported a case. And then others again who don’t have it but are worried.”

A common criticism is that the WHO has been too beholden to China. Dr Tedros repeatedly praised Chinese efforts to tackle Covid-19 before reports emerged of the authorities’ slowness in dealing with the outbreak in its early days.

The issue is explored on Monday in a question from a CNN journalist, who asks Dr Tedros whether he will raise with the Chinese authorities their harsh treatment of online bloggers who, it now appears, blew the whistle on the emergence of the virus last year.

Ryan takes the question addressed to his boss with a general answer that stresses the need to balance competing rights. While WHO prizes openness and “good information”, he says, “it’s very important that all governments are able to balance the good of society and the community against the rights of individuals to openly communicate”.

Back in his office again after the press conference, with the world’s problem glowing on the screen behind me, Ryan admits that this crisis could go either way.

While there were only “a tiny, tiny number” of cases outside China, “we’re in that kind of phony war now where the disease has stabilised, but we’re not really sure it’s going to disappear, or whether it’s going to just spread and accelerate again”.

There are encouraging signs, notably the slowdown in new cases reported from China. But the big worries are the continuing lack of information – “we can tell whether you have the disease, but not whether you had it in the past” – and the danger of it overrunning a fragile state or a conflict zone with poor health facilities.

He frets about the ability of health systems around the world “which have been pared back so there’s minimum infrastructure to deliver maximum output” to respond to a large-scale outbreak.

If Ireland does get a case of Covid-19 it will probably have been imported from the UK, he says, because “travel is the driver of this outbreak except in China, where things have been locked down”.

Ireland is one of the few countries on Ryan’s map marked clear of any disease outbreak or other disaster. Nonetheless, he says, people have to understand “there’s no such thing as a zero-risk, that it is impossible to reduce risk of anything to zero”.