Pair being treated in hospital in Japan, Tánaiste confirms in statement 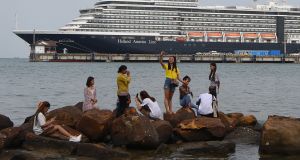 People take pictures on rocks next to the docked Westerdam cruise ship in Sihanoukville, Cambodia on Tuesday as authorities checked if any passengers that remained could have the Covid-19 coronavirus. Photograph: Tang Chhin Sothy/AFP via Getty Images)

Two Irish-German passengers who were on board the Princess Diamond cruise ship, currently docked off Yokahama, Japan, have tested positive for the coronavirus.

Minister for Foreign Affairs and Tánaiste Simon Coveney confirmed two people who share dual citizenship with Germany and are not normally resident in Ireland are currently being treated in hospital in Japan.

“Six Irish citizens were on board the Princess Diamond cruise ship, which is currently docked off Yokahama, Japan,” he said.

“Two of these tested positive for COVID-19 and are currently being treated in hospital in Japan. These citizens share dual citizenship with another EU member state and are not normally resident in Ireland.”

The Irish Embassy in Tokyo is in ongoing contact with them regarding their consular needs, Mr Coveney added.

“We are also in close contact with those who remain in quarantine on the ship. We are working with our EU Partners and other like-minded countries regarding options for their return.”

Mr Coveney said nine Irish citizens were passengers on the Westerdam Cruise Ship, which is currently docked off Sihanoukville, Cambodia.

“Seven are currently being screened, along with other passengers and crew. Our Embassy in Hanoi is in ongoing contact with the citizens regarding their consular needs. Only two of these seven are normally resident in Ireland.

“Two further Irish citizens, who were also passengers on the Westerdam, returned to Ireland over the weekend. The Health Service was informed.”

A married couple from Co Meath is also onboard the Princess Diamond. “They’re exhausted and don’t want to communicate with anyone,” a source told The Irish Times.

The Department of Health’s Chief Medical Officer Dr Tony Holohan said; “We are continuing to monitor the situation globally.

“While the overwhelming majority of cases to date have been reported in China, we continue to advance preparedness plans here in Ireland. We remain in a Containment Phase, and our actions are in line with guidance from European Centre for Disease Prevention and Control and the World Health Organisation.”

He said: “Hospitals have designated leads for Covid-19 preparedness and isolation response requirements have been identified and are in place in order to deal appropriately with any suspected cases.”

Meanwhile, Dr Sarah Doyle, HSE Consultant in Public Health Medicine said: “The HSE has plans in place to respond to cases of Covid-19 (coronavirus) in Ireland. If it’s possible that you have Covid-19 we want to know as soon as possible. This is so we can take the necessary public health measures to stop the virus from spreading in Ireland.

Dr Doyle said the most important action people can take to protect from Covid-19 is regular hand-washing and good respiratory hygiene.

Earlier, The Irish Times learned that two Irish passengers aboard the MS Westerdam returned home and entered self-imposed isolation for potential coronavirus after the ship docked in Cambodia last week.

Passengers were allowed to disembark from the ship but an American later tested positive for the Covid-19 virus.

“There is a second cruise ship off Cambodia, we’re working with Irish nationals on both of those ships to make sure they’re safe. And if they’re in quarantine [there] to make sure those conditions are safe,” Mr Coveney told RTÉ’s Morning Ireland on Tuesday.

The Department of Foreign Affairs is currently offering consular services to those affected and establishing whether anyone requires medical attention.

The total number of Irish passport-holders onboard the two ships is not yet clear but is understood to be below ten. The Department of Health will not comment on individual cases.

Ireland does not operate a system of enforced quarantine. In line with EU guidelines, it advises anyone who may have suspect symptoms to contact their GP and arrange to be tested.

“You will remain in isolation until a test result is generated,” official Department of Health guidance advises.

As yet there have been no confirmed cases of coronavirus, or Covid-19, in Ireland and the situation is being kept under ongoing review by health officials.

Síle Nic Chormaic, an Irish scientist at the Okinawa Institute of Science and Technology said criticism of Japan’s handling of the crisis missed the mark.

“Any government that puts about 100 medical staff into a ship like that is doing something right; they wouldn’t do it in Ireland,” she said.

As regards the spread of infection, Ms Nic Chormaic said it could happen through normal human interaction between crew and passengers.

“You can’t touch your money or passport – maybe some people didn’t realise that,” she said.

Reports from Japan said there were 88 more cases on board the Diamond Princess as of Tuesday, bringing total to 542.

As for the Westerdam, its operators Holland America Line, which is owned by cruise giant Carnival Corp, said 255 guests and 747 crew were still aboard awaiting clearance. The ship docked at the port of Sihanoukville on Friday.

“We anticipate this will take several days and greatly appreciate the thoroughness of all authorities involved in resolving this situation,” a statement from the cruise line said.

Another 406 passengers who had been transferred to Phnom Penh have tested negative for the infection.

“Cleared guests may travel home, and arrangements are being made for those guests,” the company statement said.

Some 1,455 passengers and 802 crew boarded the cruise ship when it set sail on February 1st from Hong Kong. The vessel spent two weeks at sea after being turned away by Japan, Taiwan, Guam, the Philippines and Thailand even though the ship said there were no coronavirus cases aboard.

Meanwhile on Tuesday, Russian authorities in charge of coronavirus prevention said they will suspend the entry of Chinese citizens to its territory starting from February 20th.

“The restrictions will not affect transit passengers,” Russian authorities added.

China reported its fewest new coronavirus infections since January on Tuesday and its lowest daily death toll for a week, but the World Health Organization said data suggesting the epidemic had slowed should still be viewed with caution. – Additional reporting Reuters