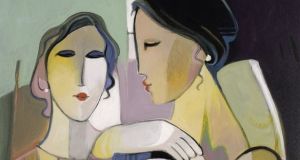 American-Iranian artist Ali Golkar’s The Musician and her Apprentice had an estimated sale price of €300-€500, but sold for €5,000.

An auction of artworks from the New York office of the defunct Anglo Irish Bank sold for twice the estimated pre-sale value on Monday evening.

The sale was the second of three lots of artworks the now infamous bust bank’s liquidators put up for auction by Whyte’s auctioneers on Molesworth Street, Dublin city centre.

The artworks were put up for sale by the liquidators of the Irish Bank Resolution Corporation, which houses the remnants of Anglo and Irish Nationwide Building Society and was set up in the aftermath of the financial collapse.

Whyte’s have a further seven pieces from Anglo offices which will be auctioned in a sale on March 9th, with a pre-sale estimate of about €3,000.

The Monday sale was an online auction and the majority of bidders were Irish collectors, although there was a small amount of American interest, said Mr Whyte.

“It did very well . . . They’re big and they’re bright and they’re colourful,” he said of the pieces, which previously adorned the walls and halls of the American office of the most controversial bank in Ireland.

“They were bought for the New York office, so a New York interior designer probably picked them out,” said Mr Whyte. The pieces were described on the auction website as “an interesting collection of contemporary American art”.

The pieces were “attractive” and would likely have been “reasonably priced” when purchased for the bank’s New York office, said Mr Whyte.

“There was low estimates because it is a liquidation sale,” said Mr Whyte, adding that there had been “a lot of competition” during the Monday auction.

Given the notoriety that now surrounds the defunct lender, acquiring a piece previously owned by the liquidated bank would likely be a dinner party “conversation piece” for buyers, said Mr Whyte.