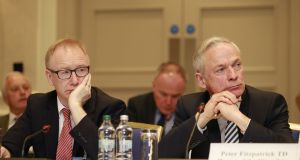 Eight or nine years ago he felt his political career was over. But on Thursday Frankie Feighan will return to the Dáil having successfully won a seat for Fine Gael in the Sligo-Leitrim constituency.

There was the widespread public ire over his support of the Government to withdraw Accident and Emergency services at Roscommon County Hospital in 2011 and as a result he didn’t stand in the 2016 general election.

But he has no regrets over his stance on the hospital back then, though he expected, then and now, that he should have received greater support from colleagues at the time.

“There would be a hundred people dead today under the old arrangements for the A&E, where you’d go to Roscommon to be stabilised, sent to Galway and patients would die on the road. The hospital is twice as busy as ever before.

“I felt let down that I put my personal and political good name out there. Yet some Ministers didn’t give two continentals at the time. I suppose that’s politics. But I did expect a little bit of, not empathy, but more support.”

Feighan’s success in the most recent election was one of the few good news stories in the general election campaign for Fine Gael. In time, he hopes it will leave him in line for promotion.

“Before, there were different reasons why I wasn’t considered for a Ministry, geographical for one. But now, I feel that I won’t be behind the door when it comes to telling people my ability or my seniority.”

He mentions his roles as chairman of the Good Friday Implementation body and being a member of the British-Irish parliamentary body: “I’ve always tried to do what’s right. I’m not afraid to make difficult decisions.”

For all that, he believes Fine Gael will be in opposition unless the “political stars” align. Indeed, Feighan believes a term in opposition is needed to regroup after nine years in Government.

“It’s hard to pinpoint why there were the results of the other day. I think there’s a ‘transient constituency of voters’ out there – in 2011, it was Fine Gael and Labour, last year it was the Green Party, this time it is Sinn Féin.

“There are two worlds out there – a Facebook world and a real world. I was very encouraged visiting houses and businesses,” he goes on, “Most people were measured and respectful.

“Then you look at Facebook and you kind of think that there was every type of lunatic waiting around the corner,” declared Feighan, who returns as a TD on Thursday after a four-year absence.

The Roscommon A&E battles have left scars: “I used to be very sociable. I haven’t had a drink outside Boyle town since 2011. I went to Castlerea one night and someone tried to assault me,” he says.

“At funerals people refused to shake hands with me. I also turned off – I closed down myself. I was angry and hurt but thankfully, it’s toughened me up,” he declares. But he would still do the same thing. if asked again today.

“Locally, politics is such that once you become toxic, people don’t really want to know you,” he says, “ I remember going to a local book launch and was in a corner of the room and no-one, I mean no-one, came over to me.”

The crash left its mark on many, including himself: “I was one of those people. Recession brings a lot of other complications – personal and financial. I accept there are a lot of people out there still very hurt and angry.”

He is fearful of a populist Sinn Féin government, if that occurs: “If Sinn Féin can prove themselves, or Fianna Fáil or Fine Gael, that they will act in the best interests of the country and the people, then that’s a result.”

But Sinn Féin has made “auction politics” pledges that cannot be fulfilled. Referring to Sinn Féin TD David Cullinane’s “up the ’Ra” remark, he says, “We won’t unite our country with actions such as that.”

Feighan wears the poppy, proudly, believing that the role of all Irish should be commemorated. But, it was a mistake to commemorate the RIC before the election, he says simply.