Watchdog ‘concerned’ at Renua failure to account for State cash

Party received over €258,000in public funds last year but no longer qualifies after election 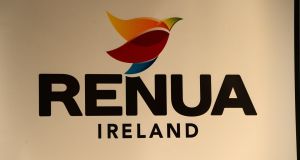 Renua has no elected officials. On its website it lists 14 individuals as either candidates or local area representatives. File photograph: Cyril Byrne

Renua failed to submit returns to the Standards in Public Office (Sipo) commission detailing how it spent public funding last year, in breach of statutory obligations.

The ethics watchdog said it was “very concerned that Renua has failed to meet its statutory obligations to account for public monies that had been provided to it as a qualified party”.

The small right-wing party currently has no elected officials. On its website it lists 14 individuals as either candidates or local area representatives.

On Wednesday, Sipo published a report detailing how each political party had spent funding received from the exchequer last year.

The report noted that “Renua had not submitted either their Statement of Expenditure or the Statutory Auditors’ Report for 2019 by the 30 April 2020 deadline.” The commission said as of this month, the returns remained outstanding.

The watchdog said where a party failed to submit a breakdown on how it had spent the funding, further public monies could be withheld until it complied with the reporting obligations.

However, as the party no longer qualified for public funding, “no action can be taken against Renua for failure to comply with its obligations”, the commission said.

Michael Farrington, the party’s national treasurer, did not respond to a request for comment on the matter on Wednesday evening.

John Leahy, a county councillor in Offaly and previously their only elected official, stood down as leader of the party in June 2019.

The party was set up in 2015 by Lucinda Creighton after the former TD left Fine Gael following a dispute over abortion legislation, along with Billy Timmins and Terence Flanagan. In its first election in 2016 the party lost all three of its Dáil seats.

Fine Gael spent more public monies than any other political party last year, with a recorded expenditure of €2,078,260, according to Sipo’s report.

That included spending of more than €1 million co-ordinating the activities of its constituency branches and members, €861,060 on administration costs, and €15,919 on policy formation.

The party also spent €84,159 promoting the participation of women in politics, more than any other party.

Solidarity-People Before Profit spent the vast majority of its €391,178 in funding last year supporting the activities of its branches and members.

The amount of funding allocated to parties is based on the percentage of first preference votes received in the last general election. The State funding is not permitted to be spent on election or referendum campaign expenses.