Nursing students receive only a €50 weekly allowance, and are not allowed second jobs 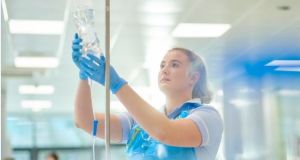 The Dáil was told more than 70 per cent of student nurses surveyed in 2018 were considering leaving the country. Pay and conditions were a major issue. File photgraph: Getty Images

The Government has been accused of treating student nurses and midwives who prop up the health services like “skivvies” and “slave labour”.

Fianna Fáil, Fine Gael and the Green Party were condemned in the Dáil for failing to pay students for their work on frontline health services. They had briefly received the healthcare assistant rate of €14 an hour during the first wave of the Covid-19 pandemic but this was withdrawn.

Solidarity TD Mick Barry warned that treating the 4,000 student nurses and midwives like “skivvies” might save the State money in the short term but would be a huge cost in the medium term or even sooner.

He also claimed the State was engaging in gender inequality by failing to pay the student nursing body, the vast majority of whom are women.

In Australia student nurses and midwives are often paid more than €15 an hour and more than €12 an hour in Canada, but in Ireland nursing students receive only a €50 weekly allowance, and are not allowed to have second jobs outside work because of the risk of spreading the virus.

A Solidarity-People Before Profit motion called for the immediate reinstatement of the healthcare assistance rate of €14 an hour, for the ending of student nurse fees of €3,000-€7,500 to stem the “brain drain” and to allow the HSE to recruit enough nurses to run the health service at safe and adequately staffed levels.

Mr Barry warned that more than 70 per cent of student nurses surveyed in 2018 were considering leaving the country. Pay and conditions were a major issue.

He said being a healthcare worker was the most dangerous job in Ireland in 2020, because they accounted for one in six of all Covid-19 cases.

Mr Barry added that “thousands of people, without whose toil the health service would collapse, are paid nothing”.

Minister for Health Stephen Donnelly was absent from the debate and a number of TDs described it as “an insult” to those frontline student nurses.

The Government did not support the motion but Minister of State for Health Anne Rabbitte said officials had completed a review of the current student nurse placement accommodation and travel allowances. She said the Minister was “considering the output from that review and will outline his approach to this matter soon”.

There were likely to be further talks with the unions on the issue, she said, adding that “I want to be clear that I do not underestimate the difficulties that student nurses and midwives have experienced over the past nine months”.

Sinn Féin health spokesman David Cullinane said student nurses and midwives were the glue holding the health system in place and that they performed duties “far beyond their educational requirements, often filling gaps in employment caused by illness or vacancy”.

He said they could not take part-time jobs because of the risk of spreading the virus but still had to pay rent and bills.

Labour leader Alan Kelly said student nurses were being treated as “slave labour”. He had been contacted by nurses who came home to help during the pandemic but could not get permanent jobs in Ireland and were forced to leave again.

Social Democrats TD Róisín Shortall said nurses had been through a “war zone” this year and many had contracted Covid-19 and the least that could be done was to waive their €100 Nursing and Midwifery Board annual registration charge this year.

Independent TD Sean Canney said “we are all in this together, and the student nurses and midwives need to be there too. We must ensure we treat them with the dignity they deserve.”