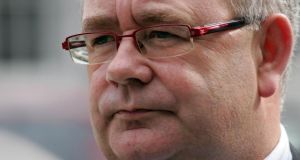 Seán Ó Fearghaíl has been a popular and well-regarded Ceann Comhairle, seen as fair-minded and even-handed.

Impartiality is a cornerstone of the role. As Ceann Comhairle, Ó Fearghaíl has shed his Fianna Fáil allegiances in public and presided over the uneven and sometimes unruly chamber, with the authority and sometimes frustration of the schoolteacher he once was.

As with the office of president, he has to try and remain above the fray. “You will appreciate that as Ceann Comhairle, I must be particularly conscious of the independent and non-partisan nature of my office,” he wrote in his letter to Northern Ireland’s First Minister, Arlene Foster, on Tuesday.

Lately some colleagues in the Dáil sense Ó Fearghaíl has been pushing close to the boundaries of his constitutional role, including with his outspoken speech in the chamber on the golf dinner scandal, where he described the collective attendance of the Oireachtas Golf Society as fundamentally wrong, displaying either “collective crass stupidity” or “arrogant delusion”.

The concept of his role’s independence has come up again this week in his reply to the letter sent to him by Foster denouncing Sinn Féin TD Brian Stanley’s tasteless tweet about the Kilmichael and Narrow Water atrocities. Why she sent it to him is perplexing, given that sending an insulting tweet – even a crass one – has little to do with parliamentary activities (and if it were so, half the Dáil would be in the dock).

In his reply the Ceann Comhairle entered the caveats about independence. But much of the rest of the letter contained value judgments.

“To post such a hurtful statement on social media is not only highly disrespectful to victims and their families but an affront to all those committed to democratic politics on the island of Ireland. ”

And later: “I believe that the statement on Twitter made by Deputy Stanley calls for a credible political response – one which sincerely acknowledges the hurt and offence caused.”

While few members of the Dáil would disagree with the Ceann Comhairle’s sentiments, several TDs from different parties have pointed out that that is beside the point. The phrase that all have homed in on is the call for a “credible political response”, which has been interpreted as a call that action must be taken in relation to Stanley’s tweet.

“There were people who were a bit concerned that he has strayed behind the normal impartial view,” says a long-serving TD.

“If there is an issue like this it should get referred to the Committee on Procedure. It is up the House collectively and not for the Ceann to set the standard.”

Several Sinn Féin TDs feel Stanley is being singled out and there are others who have been involved in greater controversies or breaches who have not been treated in this way.

“The difficulty for me is it creates a precedent,” says one Sinn Féin TD. “Does he now go into the business of giving commentary on every controversy? Where does it end?”

Those who strongly support him point out he was faced with an unusual set of circumstances when Foster wrote to him, which required a response.

They have pointed out he has emphasised his independent role and the words “credible political response” merely refer to it being a matter that needs to be dealt with in the political sphere: in other words, not by him.

Fianna Fáil TD Paul McAuliffe said on Wednesday there was a noticeable “pile-on” against Ó Fearghaíl by Sinn Féin supporters on Twitter.

It served to detract some attention away from Stanley’s apology on Wednesday. The Laois TD is one of more low-key members of the Dáil and is rarely in the spotlight despite being chairman of the high-profile Public Accounts Committee.

At a specially convened meeting, he made a subdued apology, saying he fell below the standards expected of a TD. “For that I am genuinely sorry.”

It feels like here is where the controversy will end. The bulk of members accepted his apology but with qualifications and criticisms. Catherine Murphy of the Social Democrats, for example, asked for an assurance it was a “one-off”.

Only the Fine Gael members raised objections. Colm Burke called for a Dáil statement. Jennifer Carroll-MacNeill directly said she was concerned the contentious tweet expressed how Stanley really felt. She also referred to his party being a “highly strategic organisation”, referring to its role in damage limitation after the event.

And the net result of it all? Stanley has apologised. He will stay on as PAC chairman. Other parties harshly criticised him for the tweet and his party for what they see as strategic cynicism. It’s unlikely they will pursue him further. For now that represents, to use Ó Fearghaíl’s phrase, a “credible political response”.