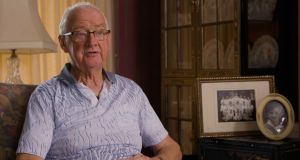 On a May evening earlier this year Peter Lynch answered the phone to a local fisherman near his home in Co Monaghan. A new cross-border search for Mr Lynch’s father – Michael “Tony” Lynch, who went missing 18 year ago – had started in January 2020 but was suspended following the outbreak of Covid-19.

“I was not expecting that call,” says Mr Lynch, adding that the fisherman explained he wanted to give the news “face to face”. “I said no, I’d rather know now. He said we’ve pulled a car from Lough Erne this evening, it’s your father’s car.”

The fisherman had noticed a large submerged object on his vessel’s sonar equipment and contacted gardaí. Garda investigators would later confirm the car pulled from the water on May 18th was the Mitsubishi which belonged to Tony Lynch who went missing in January 2002. The remains discovered in the vehicle were also confirmed, through DNA technology, to belong to the late Mr Lynch.

His son Stephen says the family are indebted to the fisherman who called that day. “We can’t thank him enough, he doesn’t realise what he’s actually done. Once dad was found then everybody wanted to talk about him. It’s great now that there is a grave to go to. We never thought we’d have that.

“It wasn’t the exact answer we were looking for but it was good enough and it gives hope to some other families.”

The Lynch family story was shared on Wednesday to mark Ireland’s eighth National Missing Persons Day which was held online because of Covid restrictions. As of last month, 823 missing person cases remained open with an Garda Síochána, down from the 890 cases that were unresolved in December 2019. Of those reported missing so far this year, 52 have yet to be found including 18 children.

Frank O’Neill’s brother Jimmy was 16 years old when he went missing almost exactly 73 years ago, on December 15th, 1947. The youngest of seven children, Mr O’Neill has spent his life trying to find answers for his older brother’s disappearance.

Speaking as part of Wednesday’s online National Missing Person’s event, Mr O’Neill recalled how his late mother spent the night before she died crying for her missing son. His father died from a broken heart in 1966, he added.

“Only those who have endured it know exactly the unhappiness it creates with a missing person,” said Mr O’Neill in video recorded in his home. Propped on the table beside the chair where he sat during the interview was a framed black-and-white photograph of his missing brother James (Jimmy) Malachy O’Neill.

“There’s times when you would ask yourself why are the people who are out there and know something, why are they depriving the loved ones of that little bit of leeway to advance their cause?”

Gardaí need the public’s assistance in solving missing person cases, he went on. “You don’t ever give up hope. Hope is a major factor in my life. Keep up your spirits and talk amongst your family. Make sure the person in question is never forgotten.”

Chris Enright, director general of Forensic Science Ireland (FSI), urged families to provide DNA samples to gardaí investigating the disappearance of their loved one. These DNA samples can have “a profound impact on identifying a missing person”, said Mr Enright, who referenced the case of Stephen Corrigan whose remains were discovered in Rathmines, Dublin earlier this year. Mr Corrigan was identified using the DNA sample his late mother had given following his disappearance in 2010.

FSI currently has 516 DNA profiles from 237 families associated with missing persons on its national database, said Mr Enright. Providing a sample is “straightforward and non-invasive” and “greatly increases” the group’s ability to identify unidentified human remains, he added.