Covid-19 vaccination in Northern Ireland can start next week – Swann

A ‘hugely significant day’ but people must not loosen their guard against virus, says Minister 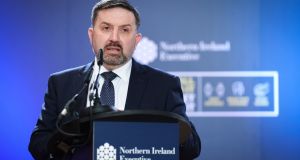 Northern Ireland will start seeing a rollout of the first vaccine against Covid-19 in less that two weeks’ time with 12,000 people due to be immunised before Christmas, the North’s Minister for Health Robin Swann said on Wednesday.

The application of the Pfizer/BioNTech vaccine was due to begin on Monday week, December 14th, but Mr Swann said that could be brought forward by a couple of days and vaccination can actually start next week.

“This is the start, it is not the end,” said Mr Swann in welcoming the UK authorisation of the vaccine. “It is the beginning of the end.”

News of the authorisation was announced as the North’s health department reported four more deaths from coronavirus, along with 416 new cases.

Mr Swann said this was a “hugely significant day for Northern Ireland”, but that people must not loosen their guard against Covid-19. As Northern Ireland remains in lockdown until Friday week, he said people must continue to follow the rules for preventing coronavirus infection as it was likely to be the summer before the vaccination programme is completed.

Under the UK’s shared allocation of the vaccine, Northern Ireland initially will be entitled to 25,000 phials of the Pfizer/BioNTech vaccine. As it is a two-jab inoculation, that will allow about 12,000 of the most vulnerable persons to get the vaccine before Christmas, the Minister said.

While not firmly established, it appeared likely that rather than care home residents and those over 80 getting the first vaccines, frontline health workers and care home staff, who could travel to vaccination centres, would be the first to receive the immunisations.

Mr Swann intimated that the logistical cold storage demands and sizes of the Pfizer/BioNTech vaccines made them more suitable to mass vaccination centres. He indicated, as did the North’s chief medical officer Dr Michael McBride, that with this first vaccine it would hardly be practicable for the elderly and care home residents to travel to vaccination centres.

“Forthcoming vaccines should be more suitable for mobile unit deployment and especially for our care homes,” said Mr Swann.

On Tuesday, Patricia Donnelly, who is in charge of the Covid-19 vaccination programme, said the North’s health service was “good to go” in terms of rolling out the scheme from December 14th.

She said the programme would start with the vaccination of frontline health care workers, adding that the service had 800 experienced vaccinators in place with more than 600 vaccinators who had applied to join the scheme. She added that seven locations for the vaccinations already had been selected.

The vaccinators are expected to get the vaccines first, with the roll-out continuing thereafter to the frontline workers.

Mr Swann said how vaccines were assigned was determined by the UK’s Joint Committee on Vaccination and Immunisation but there had to be “flexibility” in how that was done.

He said women who were pregnant or planning to become pregnant during the vaccine programme were advised against taking it.

In welcoming the authorisation of the vaccine, Ms Foster stressed that this was not the end of the “fight against Covid”.

“This is a pathway out but we must walk all of that path until we reach its end. We must all keep to the public health advice,” she said.

Deputy First Minister Michelle O’Neill said news of the development would be one of mixed emotions for those close to people who had died with Covid-19 – a toll now totalling more than 1,000. She said she would have no issue with taking the vaccine herself, but added there was no question of making such immunisation mandatory.