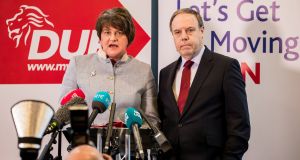 The tussle between the outgoing MP and DUP deputy leader Nigel Dodds and Sinn Féin’s John Finucane in the North Belfast constituency is as nasty an election contest as you could probably imagine.

In a sense Dodds is not only trying to protect his seat and his party but to safeguard the union. Whatever the result it could have wider repercussions. One senior Sinn Féiner even wondered would the loss of the seat send the DUP into such a “tailspin” that it wouldn’t have the energy to try and restore Stormont when all the election ferment has died down.

Regardless, Finucane is seeking to take North Belfast next month and help reinforce the Sinn Féin argument that all its talk of a united Ireland is not just an academic exercise – and to hive off any deflation should it suffer any losses in, say, Foyle or Fermanagh South Tyrone.

Finucane, a lawyer, is lord mayor of Belfast and son of murdered solicitor Pat Finucane.

If the SDLP takes South Belfast – and candidate Claire Hanna has a very good chance – then with a Finucane victory three of the four Belfast constituencies would be in nationalist hands. And then there’s the threat to the DUP in East Belfast from Alliance leader Naomi Long.

North Belfast therefore is a bare-knuckle tribal fight, which is why it is so ugly. Virtually everybody has cleared out of the ring and left it to the DUP and Sinn Féin to slug it out.

Nuala McAllister for Alliance, a strong candidate in most other settings, is staying in as the third aspirant. She, presumably, will suck up the bulk of her party’s vote and the votes of those disgusted with what they see as a sectarian joust.

The Ulster Unionists and Progressive Unionist Party have withdrawn to assist Dodds. The SDLP and the Greens also have pulled out under the cover of supporting Finucane because he is the Brexit Remain candidate. People Before Profit and the Workers’ Party also are giving North Belfast a miss.

No matter how it is dressed up, this is Orange versus Green in a most primal form.

Everybody knows what is at stake here. Which is why the battle is so poisonous, as demonstrated by incendiary loyalist banners with the slogan, “The real Finucane family”, erected in the constituency.

Some DUP strategists privately lament that the loyalists were damaging their candidate because the banners stirred up the nationalist electorate. Dodds was strong in deploring the tactic.

“We want to make it very, very clear, that anything that is personally abusive or offensive or in any way inaccurate or sneering of any candidate in any political party is to be condemned,” he said.

But Dodds and DUP leader Arlene Foster turned it back on Sinn Féin. Dodds challenged the party to condemn the IRA gun attack on a police officer who was guarding him as he visited his late son Andrew in the Royal Victoria Hospital in Belfast in 1996, while Foster asked Sinn Féin to condemn the IRA attempt to murder her father, John Kelly, at their family farm in Co Fermanagh in 1979.

There was no condemnation. Sinn Féin Assembly member Alex Maskey accused the DUP of seeking to deflect attention from the banners’ row, adding: “There is no single and agreed narrative to the past and Sinn Féin is not interested in refighting the battles of the past.” Party leader Mary Lou McDonald complained of DUP “whataboutery”.

The charge and counter charge will continue to polling day as the DUP and Sinn Féin seek to squeeze out every single possible vote they can for their candidates.

The two parties are throwing major resources into North Belfast. Canvassers are joining from other safer constituencies to assist. In terms of numbers of canvassers Sinn Féin has the edge.

Dodds first won the seat from the Ulster Unionists in 2001 and up until 2015 his chief rival was Sinn Féin MLA and former IRA prisoner Gerry Kelly. Most times Dodds won by 5,000 votes or more although in 2010 Kelly got close, losing by 2,224 votes.

Sinn Féin switched to Finucane in 2017 and he ended up just 2,081 votes behind Dodds. In all those elections the SDLP stood candidates but this time it is not running and that could be a huge factor in who will be the representative for North Belfast.

Finucane has to make up more than 2,000 votes, which is difficult but far from impossible. Those votes could come from SDLP, People Before Profit and Workers’ Party supporters, and also from some Greens and Alliance people.

Finucane is a different candidate. He doesn’t have an IRA pedigree. Moreover, the murder of Pat Finucane by the UDA and evidence of British state collusion in his killing resonate with all strands of nationalism.

“There is a different sense about Finucane. People who would not be comfortable voting Sinn Féin are more comfortable voting for him because of his story and his background. They just don’t view him in the same was as they would Gerry Kelly and more importantly they don’t like Dodds,” said an SDLP observer.

Issues like Brexit, the “cash-for-ash” Renewable Heat Incentive (RHI) scandal and a prevalent view that Foster and some of her senior DUP people have “disrespected” nationalists and Catholics assist the Sinn Féin project.

Most people in the constituency are fired-up by this battle but if the DUP and Dodds are to hold on they must get all their vote out.

On count day, December 13th, North Belfast could be decided by a handful of votes. In the countdown to polling there could be more developments that could sway voters one way or the other, or galvanise the unionist stay-at-homes to come out. But right now in this brutal dogfight the slight advantage appears to be with Sinn Féin and John Finucane.