Head of Anglicans hopes conservative wing will not spur schism 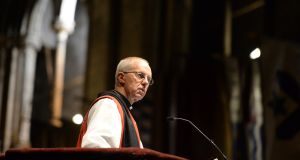 Archbishop of Canterbury Justin Welby at the official launch of the national programme to mark the 150th anniversary of the disestablishment of the Church of Ireland as a state church, in St Patrick’s Cathedral, Dublin, on Saturday. Photograph: Dara Mac Dónaill

The leader of Anglicans worldwide, Archbishop of Canterbury Justin Welby, has said he hopes the emergence of conservative Anglican body Global Anglican Future Conference (Gafcon) will not lead to a schism.

“I hope and pray not because we are called to love one another. I value them, I talk to them, I listen to them, I’m not proud enough to think I am right and they’re all wrong,” he said at Dublin’s St Patrick’s Cathedral on Saturday night.

Gafcon, a conservative movement within Anglicanism, was founded in 2008 following the consecration of gay man Gene Robinson as Bishop of New Hampshire in the US. More recently it has been discussing objections to the ordination of women as priests and bishops.

Archdeacon David McClay, a member of Gafcon Ireland, was confirmed as the new Bishop of Down and Dromore last Wednesday by the Church of Ireland’s House of Bishops.

Archbishop Welby, who is also primate of the Church of England, said: “I don’t want to talk about them as though they were the enemy. My sister or brother in Christ is never my enemy. Where they are a ‘ginger group’ within the Anglican Communion”, calling people back to “a righteousness of life, I praise God for them.

“Where they want to start another church, we have disagreements. But again Jesus says love your neighbour; love your God; love one another; love your enemy. They aren’t my enemy. They’ve got to be in one of the other three categories.”

On Brexit, he told The Irish Times, “I think historically the English have, and I’m talking English carefully here, have had always within the EU a strange relationship to it, and before that, outside it. Churchill supported the idea of a Europe, but not with England as a member. And I think there has always been that ambivalence. That showed itself in the referendum.”

He added: “I accept the referendum result. If the voters decide to change I will accept that. It’s not my job to take sides on that. I have my personal feelings, but in an election campaign they are confidential.”

Referring to European history, he added: “I think it’s undeniable that Europe changed the weather of war and peace in Western Europe, and I praise God for that. I think it’s one of the great gifts. But it is clear, from what President [Emmanuel] Macron said recently and clear from the last few years – it needs to find a fresh vision that is much more than materialist and economic.”

Archbishop Welby was speaking following a panel discussion in St Patrick’s Cathedral as part of the Jonathan Swift Festival.

Earlier on Saturday, he delivered a sermon at a national service of commemoration marking the the 150th anniversary of the disestablishment of the Church of Ireland as a state church, in 1869.

In that sermon, he described the Church of Ireland as a “church for which the Border really does not exist, as no border exists in the mind of God. Today the Church of Ireland is challenged to be the prophetic voice of God in a time when the side-effects of Brexit will produce unforeseeable consequences.

“I’m not being political here, it is simply a question of fact that the consequences are unforeseeable.I am taking as my queue, from that well-known saying – the Marxist one, Groucho of course, about never making predictions and especially not about the future,” he said in his sermon.

The Church of Ireland “is a bridge church. It bridges the two parts of this island. It has made a wonderful bridge with the Methodists. It has bridged across the gaps and divides in the Anglican Communion. It is a church of reconciliation and courage. Its history is one of regeneration, of resilience, and it has led the way in many respects, including the ordination of women.”

He singled out for praise the Catholic Archbishop of Dublin Diarmuid Martin, who was in attendance.

“Today, one of the most special moments, if I may say so, was to meet Archbishop Diarmuid Martin and to find with him not just a wonderful man of God whose courage and leadership is known well beyond these shores, but a friend of Archbishop Michael [Jackson, Church of Ireland Archbishop of Dublin] and to see in that friendship the true sign of the Irish church.”

The event was hosted by the Dean of St Patrick’s Cathedral, William Morton. Among the attendance were members of the Church of Ireland House of Bishops, Minister for Business Heather Humphreys representing the Taoiseach and the Government, Cllr Paddy McCartan, representing the Lord Mayor of Dublin, president of the High Court Mr Justice Peter Kelly, former president and Chancellor-elect of Trinity College Dublin Prof Mary McAleese, and Chancellor of Dublin City University Dr Martin McAleese.