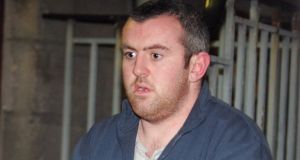 Mark Lawlor who died after being attacked while in Cloverhill prison. File photograph: Collins Courts

A man strangled to death in his cell in Cloverhill Prison has been named as Mark Lawlor (37), a Dublin criminal with a history of mental illness.

Gardaí believe the deceased was strangled after being attacked just before midnight on Friday on the B wing of the west Dublin jail.

Lawlor, who has had addresses in Ballymun and Balbriggan, suffered from paranoid schizophrenia and bipolar depression and had scores of previous convictions.

A man in his 50s and known to gardaí in the north east has been arrested over the killing.

The dead man was in prison arising from a theft charge and the suspect for the killing was in jail in relation to a criminal damage charge.

A number of other prisoners in cells close to where the dead man was killed heard a disturbance and alerted prison staff. However, Lawlor had already been fatally injured by the time prison officers rushed into the cell and was pronounced dead in the jail a short time later.

While he was in jail over non-violent crime at the time of his death, he had previously been convicted of serious crimes including possession of a knife and assault. He also had convictions for robbery and burglary

In 2009, then aged 27 years and with an address at Beldare Green, Ballymun, north Dublin, he was jailed for four years for harassing and threatening a female Garda member.

He had gone to gardaí in 2006 and alleged he was sexually abused by an older boy when he was aged eight years. While a garda sergeant investigated the case the DPP decided there was insufficient evidence to prosecute.

Two years later Lawlor began threatening and harassing the investigating officer Sgt Noleen McKenna by quoting the names of known criminals and at one point told her if he had a gun he would shoot her. The sergeant was pregnant at the time and said she had to change her daily routine, phone number and home security as a result of the threats from August to October, 2008.

Lawlor’s sentencing hearing was told he could call to Garda stations asking for her and when he was told she was not present he would become abusive.

The Irish Times understands that just before midnight on Friday a prisoner in the cell next to the one where Lawlor was killed heard a disturbance and called for staff.

While prison officers rushed to the scene and opened the cell, the victim had already been fatally injured.

Staff tried to resuscitate the man but efforts to save his life were not successful and he was later pronounced dead in the cell.

The attack occurred about four hours after prisoners had been locked into their cells for the night.

In a statement the Irish Prison Service said “all practicable measures” were taken by prison management and staff to ensure the safety of those in custody.

“However, regrettably no prison system can be completely free of violence and inter prisoner assaults do occur,” it added.

“Investigations by An Garda Síochána, the Irish Prison Service and the office of the Inspector of Prisons are underway to establish the circumstances surrounding (Friday’s) incident.”

Garda headquarters issued a statement on Saturday saying: “Shortly after midnight gardaí and emergency services were called by prison authorities following an incident involving two male prisoners in custody at the prison.

“A man in his late 30s was treated by emergency services but was pronounced dead at the scene a short time later. Gardaí are following a definite line of enquiry and the investigation is ongoing.”

After gardai arrived at Cloverhill Prison just after midnight into Saturday morning the cell where the killing occurred was sealed off as a crime scene and the dead man’s remains were left in situ.

5 Abbeyfeale: ‘People will tell you the town is f***ed’