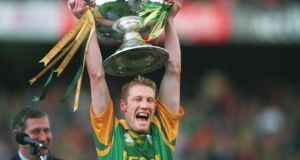 A number of GAA medals stolen during a break-in at the home of Meath’s football legend Graham Geraghty have been recovered.

A total of 13 championship medals were found by a man walking home for lunch in Arklow, Co Wicklow on Wednesday, according to Mr Geraghty’s wife Amanda

The medals were found in a bag on the footpath

Unfortunately the recovered haul did not contain the former Meath captain’s five Leinster medals or his Railway Cup ones.

In a post on her Facebook page, Ms Geraghty said: “Unfortunately his five Leinster medals are still missing probably because they are gold but we will keep praying to Saint Anthony.”

Speaking this morning, she said: “We are delighted to get the 13 medals back but we will continue to hope and pray that we will get the Leinster and Railway Cup ones returned

“The medals were found in Arklow so we are appealing now to anyone around the whole country who might see them or be offered them for sale either on their own or through a cash for gold outlet to contact gardaí.

“We would also like to sincerely thank the man and his father who recognised the medals as Grahams.

“They were still there later so he took the home. They were covered in an oily residue and as he was washing them, his father noticed they were Meath medals.”

The older man had read about the theft of Mr Geraghty’s medals and said that they might belong to him. He contacted Ms Geraghty through Facebook.

“We would like to say a huge thank you to them,” she said.

The medals were taken during a break in at their home outside Athboy, while their three children were asleep last Friday night.

At the time, in offering a reward for their return, Ms Geraghty said: “They are not worth much in monetary value but it took blood, sweat and tears to win these over a period of eleven years - one minor, two under 21s and three senior medals

“A lifetime of memories taken. We will gladly give you what the cash for gold shops will give you for them.”