Irish haulage firm says security must be improved at Cherbourg

‘We’ve had horrendous experiences with refugees in our trailers’ 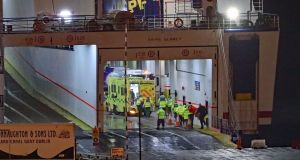 Rosslare Europort, Co Wexford, after 16 Kurds were found in the back of a truck on a ferry sailing from France. The men have since applied for asylum. Photograph: Niall Carson/PA Wire

The owner of one of Ireland’s largest haulage firms has called for security to be improved at Cherbourg after 16 migrants were found on a truck on a ferry from the French port.

The 16 Kurds, who are believed to be from Iran and Iraq, were found in a refrigerated trailer on a Stena Line ferry bound for Rosslare and have since applied for asylum in Ireland.

The owner of the Wexford-based haulage company caught up in the incident declined to speak to The Irish Times about the matter. Both he and the driver are assisting gardaí with their inquiries.

“We’ve had horrendous experiences with refugees in our trailers – the biggest problem we find is at Cherbourg,” he said.

Mr O’Leary, who has some 230 trucks plying their trade between Ireland and continental Europe using both direct sailings and landbridge connections through the UK, said his firm had at least two incidents in the last 12 months.

He said one of his drivers collected a trailer from the ferry port at Rosslare last year. “Our driver was coming back to New Ross when these refugees rang gardaí to say they were on board a truck and the gardaí pinged the call to a mast in Camolin and started stopping trucks on the N11,” he said.

“Meanwhile a woman was driving behind our trailer when her daughter suddenly shouted out that there was a hand sticking out of the trailer. The woman followed the trailer to our depot and told us what she had seen.

“We opened the trailer, a refrigerated unit carrying apples, and we found a family of Syrian refugees aboard, a mother and father, two teenage boys and a five-year-old girl – thankfully they were all safe and well but it was worrying.”

In another incident last April, one of his drivers pulled in at a truck stop in Macon in central France to rest before driving to Calais to get a ferry to Dover.

“I’m not sure how he twigged it coming into Calais but he realised these migrants had cut a hole in the roof of the refrigerated unit and 16 of them had dropped into the trailer, so we rang French police and handed them over,” Mr O’Leary said.

He said he has now told his drivers not to go within 50kms of Calais.

“It’s a horrible game at the moment for companies – Cherbourg is not doing its job properly in terms of checking trucks and the fear I have at the moment is that we will open the door some day and find people dead inside.”

It is believed the 16 migrants boarded the refrigerated trailer, which was set at a chill temperature of 16 degrees for a load of pharmaceutical products, after cutting a rubber seal.