The Government gives . . . and Fine Gael takes all the glory online 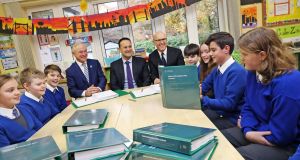 “If you have to go down and paint the school yourself, that’s what you’ll do,” the celebrated Fianna Fáil strategist PJ Mara, who masterminded Bertie Ahern’s three general election victories, once said of his instructions to TDs in advance of general election campaigns.

Mara – and Ahern – knew the political value of being seen to “deliver” locally for any TD: to bring government investment to the locality and the constituency. Ideally, it is immediate, obvious and tangible. And freshly painted.

Having been several years in preparation, the Government’s National Broadband Plan is none of those things. But Fine Gael TDs were following the Mara/Ahern playbook this week when the broadband contract was finally signed in a primary school in rural Wicklow.

TDs, Senators and candidates from the governing party immediately flooded social media with details of the good news of state investment in their locality, conveniently broken down by constituency.

A spokeswoman for the Department of Communications insists Fine Gael was not informed in advance of the details of the broadband plan – including the constituency-by-constituency breakdown – until the document was published on Tuesday morning and available to everyone.

The Fine Gael press office had supplied templates to every TD and candidate in advance, with detailed instructions for publication. It had graphics and syndicated statements ready to go. Once the numbers were released for each constituency – “€89 million! 22,000 premises!” – they were inserted and published. TDs put them out on Twitter accounts, Facebook pages and press releases.

Party officials did the same with the previous week’s release of sports capital grants, setting up templates for TDs and candidates to trumpet Fine Gael’s generosity to hundreds of sports clubs. Many posted videos of themselves at the sports clubs in question, announcing the grants. It’s a huge deal for TDs if they can get the credit for “delivering” grants to local clubs. For many of them, it would be hard to think of something they care more about.

“What I am about to raise is important in terms of how the Government conducts itself, and a strict adherence to the demarcation lines between officeholders and party political events.

“The Government organised a Fine Gael event,” he complained. “This is a serious occurrence which represents a blurring of office-holding and Government activity with party political campaigning.”

This isn’t the first time that Fianna Fáil have got agitated on the subject. The party scored a significant political victory when it forced the abandonment of the Strategic Communications Unit – set up by Leo Varadkar in order to communicate the work of Government, but viewed by the opposition as a vehicle for promoting Fine Gael in government. Senior officials were always wary about it, and Fianna Fáil managed to kick up sufficient fuss to have it wound down.

The longer they are in office, the more politicians tend to identify the national interest with their own interests

Official figures show the extent of Government spending on communications. According to figures supplied by the Department of the Taoiseach, almost €850,000 of public money was spent promoting and advertising the Government’s national development plan this year. That’s one thing as a government information campaign; but were it used for party political purposes, it would hand an enormous political advantage to Fine Gael – at the public’s expense.

Not abusing the power of government for political purposes is one of the great challenges for any government. The truth is that the longer they are in office, the more politicians tend to identify the national interest with their own interests. If that was once the preserve of Fianna Fáil – and senior party figures acknowledge they might have had questions to answer themselves in the past, to put it mildly – that is no longer the case. It is Fine Gael that is now gunning for three terms in a row.

Most countries have rules and conventions about the responsibility of ministers to act in the national interest, rather than pursue partisan political gain.

In Ireland, the code of conduct for office-holders exhorts Ministers to “act only by reference to and dedicate the resources of their offices in furtherance of the public interest”.

It has a specific provision regarding the use of the facilities of office: “Office holders are provided with facilities at public expense in order that public business may be conducted effectively. The use of these facilities should be in accordance with this principle. Holders of public office enjoy an enhanced public profile and should be mindful of the need to avoid use of resources in a way that could reasonably be construed as an inappropriate raising of profile in the context of a general election.”

But the interface of government and politics can often be tricky, blurry, indistinct territory. Look at it one way and it falls on one side of the line; look at it another way and it falls on the other. There are rules and conventions – it’s just not always clear how to apply them.

It is senior civil servants – the permanent officials, not the politically appointed advisers – who have to police the rules, to ensure that Ministers don’t cross the line. Before reaching for the rules, they tend to apply a smell test: does this just smell a bit . . . off? Should the Minister really be doing this? As a general election approaches next year, their noses will be twitching more than usual.